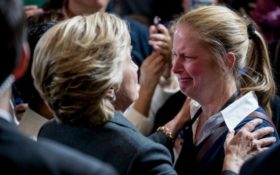 A left-wing university is threatening to bring massive legal action raining down on a small conservative group – because it used the alphabet!

The University of Oregon sent a letter to Oregonians for Immigration Reform warning that their symbol – which is the letter “O” – looks too much like the university’s trademarked logo.

The only problem is, they don’t look much alike at all…the PC university just wants to legally harass the patriotic group.

With its deep pockets, funded by tax revenues, it can afford to send threatening letters to all-volunteer groups.

OFIR put a target on its back after leading a successful 2014 referendum that saw Oregon citizens vote against giving drivers licenses to illegal immigrants – and now UO wants blood.

“The University of Oregon neither supports your message, desires to be associated with your message, nor wishes to assist in your fundraising efforts,” says a letter from the group’s legal counsel dated May 7.

The university knows it can’t win an election – but the publicly funded college can file nuisance lawsuits against the conservative immigration group until it goes bankrupt paying lawyers’ fees.

“We hope that this matter does not require the University of Oregon to bring legal action to force you to stop using its mark,” the letter says.

Ironically, university officials accused OFIR of being a “hate group” just five days after receiving a complaint about the logo from the University of Oregon Movimiento Estudiantil Chicano de Aztlán – MEChA, a group with a disturbing history. The national MEChA group threatened to declare an independent nation in the Southwest US and ethnically cleanse the region by the mass deportation of all non-Hispanic residents.

That sounds pretty racist and hateful.

Instead of crumbling to UO’s bullying campaign, the group is standing its ground – and taking its half of this David-and-Goliath fight to the enemy.

The university gave OFIR until May 18 to change its logo. One day before the deadline, OFIR told administrators to go pound sand.

“I remind you that (the UO) does not retain all rights to the capital letter ‘O’ that is not stylized in the ways yours is,” OFIR’s attorney, Randy Berholtz, responded.

OFIR even threatened to turn the university in to federal prosecutors for using its trademark to squash free speech.

“Does the university really believe it has the right to trademark a letter of the alphabet?” asked OFIR President Cynthia Kendoll. “Do Oregonians want the state’s flagship institution of higher learning to use their hard-earned tax money to bully an all-volunteer citizens’ group over such a trivial matter?”

The university’s legal harassment comes as OFIR is gearing up for a new and more consequential campaign: OFIR and the Federation for American Immigration Reform want to ask voters to repeal Oregon’s sanctuary state law.

The law has been on the books since 1987. A similar law kept Kate Steinle’s killer, Jose Inez Garcia Zarate, safe in the state of California, even though he had been deported five times.

“Might the real reason for the university’s action be to distract OFIR’s attention from its ballot-measure campaign – and thereby to chill a volunteer group’s effort to influence public policy via direct democracy?” asked OFIR communications director Jim Ludwick. “If so, it won’t work. We’ll continue our fight against illegal immigration.  We’ll get our measure onto the ballot. And we’ll continue to use the logo we use today.”

Whatever you think of sanctuary laws – and we oppose them – OFIR deserves huge credit for not caving in to the state-funded campaign to browbeat them into silence.