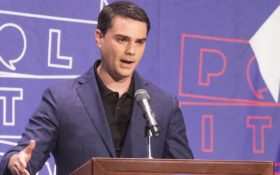 In February, the University of Minnesota forced The Daily Wire Editor-in-Chief Ben Shapiro — an outspoken young conservative — away from the main campus for a lecture.

It was an attempt to avoid protests from liberals — but it just backfired big time.

Rather than punish those that would have held a violent protest, the university chose to appease them by pushing Shapiro off campus.

Now the university is paying for the unnecessary disaster after a major donor announced he’d pulled his donations — and instead partnered up with Young Americans for Freedom.

The regulations held by the university for Shapiro were not upheld for former Senator Al Franken or Senator Elizabeth Warren, who both held speaking events there. And alumni are tired of the bias.

The damage done by the university barring the young America’s Foundation campus lecture resulted in the loss of a ton of cash.

In a letter to the University of Minnesota president, Eric Kaler, the donor writes, “It is with great sadness that I write this letter. I believe the treatment of Ben Shapiro was clearly a case of discrimination. It was not discrimination by race or gender. It was more damaging than that.”

“You have discriminated against the free dissemination of ideas,” he continued.

The donor explained that he believes that the university was fearful that once Shapiro held his lecture, students would begin to understand his conservative ideas, and they will realize they have only ever been exposed to the liberal way of thinking.

The donor concluded his letter by stating, “Because of this, I have decided to give my annual contribution for scholarship at the U of M to the Young Americans for Freedom.”

This liberal university not only hurt their reputation by discriminating against conservatives, but they also hurt themselves by losing a major donor.

The Young America’s Foundation spokesman Spencer Brown said, “We applaud this patriotic American’s decision to withhold support from an institution that undermines and discriminates against conservatives. Such a decision is an important first step in giving students a full, ideologically diverse education that includes conservative ideas. It’s a tragedy that this once-proud alumnus of the University of Minnesota has been abandoned by his alma mater.”

Liberals discriminating against conservatives ideas is not a new thing — and donors are finally sick of the bias enough to fight back.