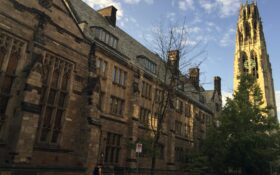 Call it a severe case of Trump Derangement System… one so intense that it cost a professor at one of the world’s most prestigious universities her job.

And now, she’s suing them over it, saying her free speech is under attack.

She’s also editor of the anti-Trump book “The Dangerous Case of Donald Trump.”

But critics say the problem wasn’t that she criticized the president.

It was her attempts to “diagnose” him and his supporters despite not evaluating them in person.

And it was one supporter in particular who may have led to her current predicament: Trump attorney Prof. Alan Dershowitz.

Lee had claimed that Dershowitz and other prominent Trump backers have a “shared psychosis” and had “wholly taken on Trump’s symptoms by contagion,” according to the Yale Daily News.

Dershowitz responded with a formal complaint, writing to the university that Lee “publicly ‘diagnosed’ me as ‘psychotic,’ based on my legal and political views, and without ever examining or even meeting me.”

And that appears to have led to Lee losing her gig, where she was a voluntary faculty member — someone who isn’t paid by the university but teaches for free in exchange for a prestigious Yale affiliation.

In her lawsuit, Lee claims the term “shared psychosis” was not actually a diagnosis for Dershowitz but just commentary.

However, the lawsuit seems to suggest she is standing by her remote “diagnosis” of Trump, calling him “a highly symptomatic individual” who by virtue of his position was able to influence others.

“Under such conditions, the person’s symptoms may spread through the population through emotional bonds: heightening existing pathologies … triggering personality predisposition … or inducing symptoms in previously healthy individuals.”

Lee wants her job back, and the New York Post reports that she also wants $75,000 in lost income and other benefits as well as “future economic losses, emotional distress, harm to reputation and loss of enjoyment of life.”

The university said she was fired not for political speech, according to court filings seen by the Yale Daily News. Rather, it was for violating the APA’s “Goldwater Rule,” which cautions professionals against commenting on the mental health of public figures unless they have evaluated the person and received permission to discuss it.

“The recklessness of your comments creates the appearance that they are self-serving in relation to your personal political beliefs and other possible personal aspirations,” department head Dr. John Krystal warned in a letter cited by the New York Post.

Lee contends that the APA’s rules against “diagnosing” someone they haven’t met don’t apply to her since she isn’t a member of the association – and told the New Haven Register that the rule amounts to a “gag order.”

Lee even went so far as to claim that silencing her and others in the industry on Trump’s mental health is a violation of the Geneva Convention, which she said includes a universal pledge “not to collude with destructive governments and its own code to serve society.”

Dershowitz says Lee shouldn’t blame him for what happened.

“[Lee] credits me with getting her fired,” he told the Yale Daily News. “I’m not that powerful. I am pleased with the fact that I brought to Yale’s attention the facts that demonstrate her deviation from professional norms. The facts are the facts, and Yale acted on the documented facts, not on my opinion.”