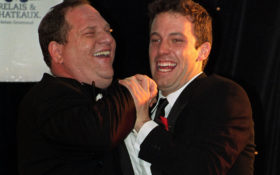 For years, Hollywood superstar Ben Affleck lectured America about morality and liberal politics. In 2016, for example, Affleck was eager to share his thoughts on President Donald Trump’s locker room talk scandal last year, telling Vanity Fair, “Women should never be talked about in that way.”

Now the truth is coming out about Affleck’s own behavior towards women — and it seems like he should have followed his own advice.

In the past week, Harvey Weinstein has fallen from the grace of Hollywood faster than anyone before him. More and more women have come forward with allegations of sexual harassment and sexual abuse against him.

Ironically, shortly after Affleck joined a chorus of actors to condemn Weinstein, he was met with allegations of his own.

Affleck had allegedly been inappropriate with women for years — actress Hilarie Burton shared a clip on her Twitter account of him groping her in the early 2000’s on MTV’s “Total Request Live.”

In the clip, Burton said Affleck “comes over and tweaks my left boob.” Affleck took to Twitter to apologize to Burton… but the flood gates had already been open.

I acted inappropriately toward Ms. Burton and I sincerely apologize

I would also love to get an apology from Ben Affleck who grabbed my ass at a Golden Globes party in 2014.

The New York Times reported earlier this week that Rose McGowan was among the women who were sexually assaulted by Weinstein. In 1997 she reached a previously undisclosed settlement with Weinstein after an episode in a hotel room at the Sundance Film Festival. The settlement stated that it was “not to be construed as an admission”, rather it was to “avoid litigation and buy peace.”

McGowan has taken to Twitter the past few days to call out powerful men in Hollywood who knew of Weinstein’s action and never spoke up.

After Affleck put out a statement that he was sick over the Weinstein allegations, McGowan quickly reported that he is a “liar” and knew of Weinstein’s conduct.

McGowan said late Wednesday that her account on Twitter had be suspended, the social media company said she broke its rules. McGowan then took to her Instagram account to ask her followers to “Be my voice”.

Many have been criticizing Twitter for muting an alleged victim of sexual harassment and a central figure in the allegations against Harvey Weinstein, and some speculate she was silenced for attacking liberal leaders.

On Thursday afternoon, Twitter released a statement that they suspended McGowan’s account because she tweeted a private phone number — a practice they state is a violation of their terms. They have since restored her account, and explained that they will be clearer about their policies in the future.

Representatives for Ben Affleck have not responded to messages.