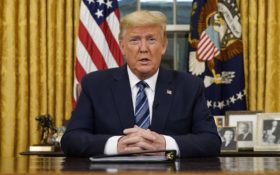 It was comedian Dave Chappelle who once upon a time appeared on “Saturday Night Live” just after former President Donald Trump was elected.

He told liberal America then to give Trump a chance.

Well — it seems they didn’t listen to him.

It turns out Hollywood liberals may have been responsible for one of the most infamous White House moments of Trump’s presidency.

When Trump’s staffers moved into the White House after former President Barack Obama left, they revealed that they saw some foul notes left for the incoming administration.

The messages — according to Fox News — ranged from “you will fail” to “you aren’t going to make it” left in offices throughout the White House.

“We came into the White House,” she said in 2019. “I’ll tell you something, every office was filled with Obama books and we had notes left behind that said ‘you will fail,’ ‘you aren’t going to make it.'”

But Chappelle is now saying otherwise.

He knows exactly who left the notes.

He spilled the details during an appearance on supermodel Naomi Campbell’s YouTube interview series.

“Remember when the Trump administration moved in,” he started, “they said the Obama staff left dirty notes for us in all the drawers and all the cabinets?”

“I’m not going to say who did it, but it was celebrities, writing all this crazy s–t and putting them all over there. I saw them doing it… ”

“I saw this happening.”

Although he’s staying mum on who exactly who it was, there’s no shortage on who it could be — of course liberal Hollywood has it fair share of anti-Trump celebrities.

What’s unlikely — however — was that it was Chappelle.

The liberal comedian noted before the 2020 election that he did not see Trump supporters as his enemy.