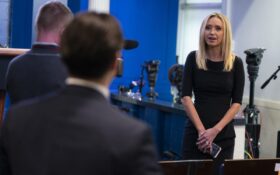 White House Press Secretary Kayleigh McEnany tangled with yet another member of the liberal media in a spat that quickly went viral.

Journalist Maggie Haberman of The New York Times went after the press secretary on Thursday — and found out the hard way that McEnany has a sharp wit.

Haberman ridiculing the suggestion that the good health of President Donald Trump and Vice President Mike Pence was something worth celebrating.

McEnany wasn’t having it.

She directly fired back at Haberman –– and corrected her “misleading” quote in a simple response.

“This tweet by a New York Times reporter is misleading,” McEnany wrote.

This tweet by a New York Times reporter is misleading.

I was TWICE asked a hypothetical about the health of the President and Vice President.

You can read the transcript of the interaction for yourself below:

Sponsored: Do THIS before bed –and wake up with COMFORTABLE hips

It proves two things to be true: McEnany was asked about both the President and Vice President’s health, and she wasn’t being a cheerleader.

Those thinking, “this situation feels all too familiar” — they’re right.

McEnany’s job as press secretary is shaping up similarly to when former press secretaries Sean Spicer and Sarah Huckabee Sanders held the position.

The liberal media is treating her poorly, no different than they did before her. All because she’s a part of the Trump administration.

The media and press secretary –– whether they want to or not –– share a relationship.

And this one is off to a rocky start.