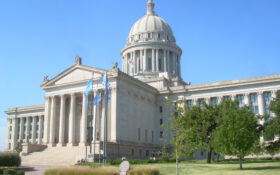 In a frightening reversal of the January 6th insurrection in Washington, D.C., an angry mob of liberal activists stormed the state Capitol Building in Oklahoma on Thursday and attempted to shut down the signing of various conservative-backed laws.

Unlike the Jan. 6th insurrection, however, this mob’s disruption of America’s democratic process has been almost completely ignored by the mainstream media.

Dozens of liberal protesters are shown on video occupying the upper level of the Oklahoma House chamber and attempting to disrupt the proceedings by drowning out lawmakers’ vote. Later, the angry group is shown confronting conservative lawmakers and chanting expletives before finally being brought under control.

Oklahoma Gov. Kevin Stitt signed a bill Wednesday to crack down on violent protesters in the state by increasing penalties for blocking roadways and granting immunity to motorists who kill or injure rioters that attack vehicles.

Despite protesters storming and disrupting the Oklahoma House vote, the bill was one of 44 bills signed into law by the state’s Republican governor on Wednesday. It is the latest in a series of GOP-backed proposals across the country aimed at cracking down on the increasingly common tactics used by rioters.

The bill makes it a misdemeanor punishable by up to a year in jail and a $5,000 fine to block a public street and grant criminal and civil immunity to motorists that kill or injure someone while fleeing a violent riot.

Supporters of the bill said it was prompted mostly by an incident in Tulsa last summer in which a pickup truck was attacked by a mob on a Tulsa interstate during a protest over the death of George Floyd in Minneapolis. Several people were injured when the truck sped off, including one paralyzed from the waist down after falling from an overpass.

The driver, whose family was in the car, was not charged.

Oklahoma wasn’t the only site of leftwing mob action this week.

In Portland, riots have erupted over numerous nights and a mob tried again to storm and burn down a federal building in the city’s downtown area. Portland has been the site of hundreds of violent demonstrations and riots over the past year.

On Thursday, unrest broke out in New York City when a violent mob defaced statues and monuments in Central Park — including the monument to the sailors killed on the USS Maine — before marching up Eighth Avenue attacking police and destroying property.

READ MORE: Cops fight back against violent rioters in Portland