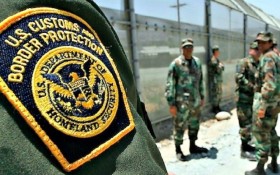 So far, President Donald Trump’s administration has done what Trump promised America he would do.

Seeing a politician keep his promises has unnerved liberals — and Trump’s latest announcement Tuesday that the U.S. would be hiring up to 15,000 more U.S. Immigration and Customs Enforcement (ICE) agents has sent leftists into a full scale meltdown.

The Trump administration is set to announce Tuesday a “big immigration launch” based on recent Department of Homeland Security proposal that called for the hiring of thousands of new officers and faster deportations for approximately one million criminal illegals currently hiding in America.

“The surge of illegal immigration at the southern border has overwhelmed federal agencies and resources and has created a significant national security vulnerability to the United States,” DHS Secretary John Kelly wrote regarding his suggestion.

In response, liberals took to social media to express their anger.

And yes, it included some tears.

Is it surprising? Liberals are more interested in feelings than in law and order, after all.

For example, Joanne Lin, senior legislative counsel for the American Civil Liberties Union, attacked the Trump style of immigration enforcement because “human decency and common sense” are an afterthought to enforcing the law.

Another account promoted violence to stop the ICE raids —

#ICERaids will regret what #American soldiers did in #Iraq. Can't wait when they decide to go in gang invested areas & apply destruction

But experts say these weepy-eyed liberals won’t be able to legally stop Trump from their plan to “expeditiously hire” 10,000 more enforcement agents and 5,000 Border Patrol officers and enforce the law.

Seeking to fulfill Trump’s campaign promise to build a wall along the Mexican border, Kelly also called on Customs and Border Protection to “immediately begin planning, design, construction and maintenance of a wall, including the attendant lighting, technology (including sensors), as well as patrol and access roads.” He describes the wall as necessary to deter illegal immigration and calls it a “critical component” of Trump’s overall border security strategy.

He says the department will also prioritize for more immediate removal those who have been convicted of a crime; charged with a crime; committed fraud in connection with a matter before a government agency; abused any program related to public benefits; or have not complied with orders to leave the country.