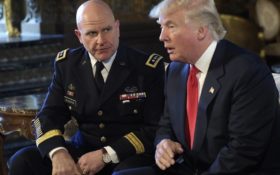 The Washington Post reported Thursday that Trump is “now comfortable” with removing McMaster because of growing criticism over his views on Iran, North Korea, and other key foreign policies.

White House Press Secretary Sarah Sanders has gone on record to announce that these new rumors are completely false — and that there will be no change in the leadership at the National Security Council.

Just spoke to @POTUS and Gen. H.R. McMaster – contrary to reports they have a good working relationship and there are no changes at the NSC.

According to NPR, “Despite a denial from the Trump administration, the only thing that’s reportedly holding up McMaster’s departure is a transition plan.”

Isn’t it funny how the mainstream media thinks they have more solid information than the Trump administration itself?

NPR reports that Trump wants McMaster out for one specific reason: He likes to lecture people.

“People in the Army say he’s ‘all transmit,’ as they would put it: He likes to lecture. That rubs some people the wrong way — and the sense is, that rubs Trump the wrong way.”

It gets better… CNN claims that the news of McMaster’s possible ouster is going to ruin his job performance.

Well, it is the mainstream media — like CNN — that is spreading this ludicrous story and they can take ownership if these rumors do effect his job performance.

CNBC has suggested that Trump is, “Taking his time on an announcement because he doesn’t want to embarrass the former Army lieutenant general, and he wants a smooth transition.”

Do you think that McMaster should be fired?

Do you think H.R. McMaster should be fired?