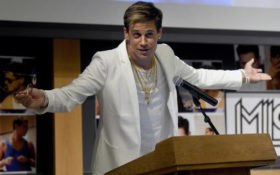 Breitbart editor Milo Yiannopoulos is under fire after video clips unveiled an interview where critics say he appears to be condoning pedophilia.

The comments were immediately condemned by both liberal and conservative media alike — but there’s one MAJOR difference the liberal media is hiding.

The liberal media has endorsed pro-pedophile statements in the past.

The article which was removed was entitled, “I’m a pedophile, but not a monster,” and is a creepy, unapologetic story of self-pity by an self-proclaimed pedophile.

This article no longer exists on Salon. pic.twitter.com/5VnO8SmsZp

First published in 2015, the article was quickly criticized by conservatives.

In fact, Milo himself responded with an article entitled, “Why the Progressive Left Keeps Sticking Up for Pedophiles,” in which he explores multiple instances of far-left liberals standing up for child abuse. He specifically targets Salon, saying, “the left-wing website runs sympathetic features on pedophilia with alarming regularity.”

While the comments made by Milo are disturbing, there’s no denying the hypocrisy in Salon’s stance of intense criticism of rhetoric they have previously provided a public platform for.

And Milo is feeling the backlash from his remarks.

He has been disinvited to this year’s Conservative Political Action Conference (CPAC) after his attempt to clarify the comments fell flat with organizers.

Hours later, his publisher cancelled his book “Dangerous,” which had been scheduled to come out in June.

On Facebook, Yiannopoulos blamed deceptive editing and his own “sloppy phrasing” for any indication he supported pedophilia. The British author said he spoke of his own relationship when he was 17 with a man who was 29. The age of consent in the United Kingdom is 16. Milo also referenced being attacked by a pedophile himself when he was 13-years-old.

It’s unclear who edited the videos.

But what is clear: the leftist media will jump on any bandwagon to criticize conservatives, even if it means going to great lengths to cover-up their own hypocrisy in the process.

-The Associated Press and The Horn News editorial team contributed to this article.