Liberal leader arrested after THIS disgusting tweet - The Horn News 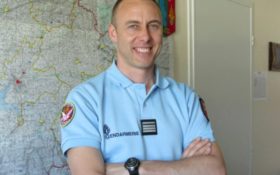 A liberal politician is behind bars after celebrating the death of a policeman murdered by a radical Islamic terrorist in southern France.

Stephane Poussier, a former far-left parliamentary candidate in France, took to Twitter to imply that the death of Lt. Col. Arnaud Beltrame was a great thing.

Poussier reportedly said the death of Beltrame made him think of Remi Fraisse, an activist who was killed during a riot in 2014 when he was hit by a concussion grenade.

“Last night I dreamed of Rémi Fraisse … He said he was happy to welcome a colonel from the gendarmerie!” Poussier reportedly wrote, saying that he was glad the French president now had one less voter.

“Mr Poussier’s Twitter account has since been deleted. It is unclear if this action was taken by him or the platform, after the tweets caused an outcry and were reported by other social media users,” BBC News reported.

Beltrame was murdered by a radical Islamic terrorist in a supermarket in Trebes, southern France on Friday, after he voluntarily traded himself to get hostages out of harms way.

In France, the maximum penalty for apologizing for a terrorist attack is seven years in prison and a fine of $120,000, the French newspaper Le Monde reported.

“The attacker, who claimed he was acting for ISIS, killed Beltrame and three others in all, before being killed by police,” NPR reported Sunday. “Several others were wounded but managed to escape.”

Beltrame has been hailed a hero by authorities and his colleagues.