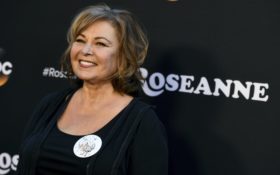 ABC canceled its hit reboot of “Roseanne” on Tuesday following star Roseanne Barr’s racist tweet that referred to former Obama adviser Valerie Jarrett as a product of the Muslim Brotherhood and the “Planet of the Apes.”

ABC Entertainment President Channing Dungey said the comment “is abhorrent, repugnant and inconsistent with our values.” Barr apologized and deleted her Monday-night tweet, calling it a “bad joke,” and said she was on sleeping pills at the time — but the damage had already been done.

Late Tuesday, Barr tweeted a second apology to the writers and co-stars of the show and urging people not to feel sorry for her. Others, however, were quick to point out the double-standard set by ABC executives who hired a liberal that regularly called President Donald Trump a Nazi — and still employ him.

One of the few network shows about a working-class family, “Roseanne” attracted considerable attention upon its return when Barr’s character supported Trump. That made the show popular with conservative viewers, and Trump himself suggested the character’s backing had a lot to do with the show’s success.

Barr herself has a history of diving into political controversy on her Twitter feed, and she ended her Memorial Day weekend with a series of statements. Jarrett, who is black, was brought up in response to Twitter commentary that raised her name in relation to an Obama controversy. Barr tweeted: “muslim brotherhood & planet of the apes had a baby=vj.”

She later tweeted an apology to Jarrett. “Forgive me,” she wrote. “My joke was in bad taste.”

I apologize to Valerie Jarrett and to all Americans. I am truly sorry for making a bad joke about her politics and her looks. I should have known better. Forgive me-my joke was in bad taste.

“Roseanne Barr’s comments were appalling and reminiscent of horrific time in our history when racism was not only acceptable but promoted by Hollywood,” said Derrick Johnson, NAACP president and CEO. “We applaud ABC for taking a stand against racism by canceling ‘Roseanne.’ We commend the network and … Dungey for placing the values of diversity, inclusion and respect for humanity above ratings.”

True… but where was is this righteous outrage when liberals on the network spew hate speech?

Social media users pointed out that “The View” host Joy Behar mocked Vice President Mike Pence’s Christian faith and called it a “mental illness,” but she was allowed to apologize a month later and keep her job.

ABC RT @Bud_Doggin: Joy Behar mocked Mike Pence’s faith on The View and said that the way he prayed to Jesus was “mental illness”. She didn’t apologize until a month later. ABC was silent. Roseanne pic.twitter.com/WlPzAC0BIC

User Jack Murphy made a long list of the double standards for liberals defended by Disney. He included four separate instances where Disney allowed leftists to keep their jobs after major scandals broke, but they fired Barr within hours.

Barr’s racist comments do not deserve any sort of defending.

But it’s only fair to demand consistency. If Barr was fired, the company’s liberal hate mongers should be, too.