Liberal Hollywood is in major trouble - The Horn News 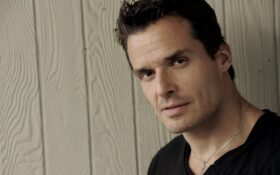 If one man’s plan works, liberal Hollywood is in for a major shakeup.

Former “General Hospital” star Antonio Sabato Jr. has announced that plans for a conservative movie studio is in the works.

He’s calling all “patriots” to help.

After being “blacklisted” in Hollywood for his conservative beliefs, Fox News reports the 48-year-old actor’s planned studio will take on the ideas that liberal Hollywood wanted nothing to do with.

“We are putting together a plan to create a conservative movie studio for all patriots to do projects that Hollywood would never do. No more blacklisting and no more injustice from the socialist’s elites,” he wrote.

We are putting together a plan to create a conservative movie studio for all patriots to do projects that Hollywood would never do. No more blacklisting and no more injustice from the socialist's elites.

It’s no big secret that Republicans and conservatives have been attacked, or silenced, inside America’s movie industry. Outspoken actor James Woods had his own agent split with him over his conservative views in 2018 — and “Eyes Wide Shut” actress Julienne Davis’ conservative confession cost her a career.

In 2017, Tim Allen lamented what it’s like being a conservative in Hollywood. He said,”You get beat up if you don’t believe what everybody believes.”

Sabato — a known friend and supporter of President Donald Trump — has gone through some tough times since endorsing the president.

He told Variety in March that his public support of the President in 2016 destroyed his career.

“I was blacklisted,” he said.

“All my representatives left me, from agents to managers to commercial agents. I literally had to move, find a new job to survive and take care of my kids.”

“It’s been terrible,” Sabato Jr. added. “It’s mind-blowing. It’s a disgrace. It’s tough, because if you’re in that environment in Hollywood and you have something to say that they don’t like, they’re going to let you know.”

Following his acting hiatus, Sabato Jr. embarked on a political journey, running for a congressional seat in California where he ultimately lost.

Although he was forced to work a construction job in Florida due to his political beliefs, Sabato Jr. insists he’s still voting for Trump in 2020.

“I was the first celebrity to come out and talk about the president, and he had my vote from day one,” Sabato explained.

“I was the first one to say he was going to win. My integrity is intact. What I believe in is still intact. What doesn’t break you makes you stronger – that’s what they say. So I’m stronger than ever, and I didn’t have to lie about who I am.”