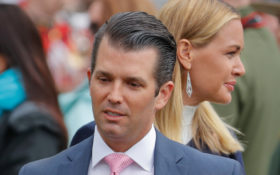 Four of President Donald Trump’s children were spotted at the White House Easter Egg Roll event on Monday, but it was first son Donald Trump Jr. that made the biggest statement — and what he wore had liberals very, very angry.

Wearing a pin that read “Deplorable,” Don Jr. stepped out on the White House lawn posing for photos proudly with the crowds.

He was joined by his five children and estranged wife at the event, and one photographer took notice to the pin he was sporting.

This statement became one of the most memorable blunders Hillary made during the 2016 election.

The president took her attack and used it as a condemnation against Hillary during the election.

Where can we purchase this deplorable pin ? pic.twitter.com/OMq7pQ8O6z

Our group The Basket of Proud Deplorables would Love to know where to get the US flag pin with deplorable on it. Thankyou for being our President and making America Great again.

@DonaldJTrumpJr May I ask where you bought your deplorable pin? I love it and want one! ????

I'd hate to be Hillary.

She got trolled today from the White House at the Annual Easter Egg Roll & it was discreetly glorious.

Donald Trump Jr. wore a "Deplorable" pin on his lapel.

Is it lost on anyone else that there were lots of "Baskets" there today as well?????#MAGA https://t.co/3wa26Rp4sP

Nothing quite says like wearing a pin to humiliate crooked Hillary.

Would you wear a “Deplorable” pin? Share your thoughts below —

Would you wear a "Deplorable" pin?