Liberal colleges BUSTED (it's costing them millions!) - The Horn News 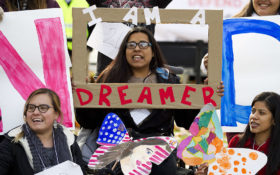 Arizona universities decided to force PC policies on the state’s conservative citizens – and that may have just cost taxpayers a huge pile of cash.

Three Arizona state universities decided to give in-state tuition to illegal immigrants – but not to American citizens living in other states. American kids from New Mexico or Nevada had to pay 150% the rate that state residents do.

But federal law says that any benefit colleges give to illegals must also be given to American citizens in all 50 states. So, Arizona taxpayers may be on the hook for millions of dollars to make up the difference!

It started in 2006, when Arizona voters passed a state referendum to ban illegal immigrants from getting in-state tuition. It didn’t matter that illegals happened to live in Arizona; they aren’t U.S. citizens, let alone committed to the state of Arizona, voters figured.

“Denying the in-state tuition, besides being fair to residents, also deters illegal immigrants from coming here,” said then-State Representative John Kavanagh, who is now a state senator, in 2008.

The voters had spoken, right? Not so fast!

An unelected judge gutted the will of the people. Former President Barack Obama started up the Deferred Action for Childhood Arrivals (DACA) program, which gave legal status to people who entered the country illegally when they were young – and Maricopa County Superior Court Judge Arthur Anderson ruled that DACA meant that illegal immigrants are in the country legally. So, illegals are no different than teenagers born in Flagstaff or Tucson.

Taxpayers don’t mind paying the difference to subsidize higher education for their own teenagers. But why should their tax dollars pay for Mexican or Central American kids to attend world-class universities?

Eventually, higher courts agreed. An appeals court struck down Anderson’s ruling. And last month, the Arizona Supreme Court ruled 7-0 that the 2,000 illegal aliens in the state university system did not qualify for in-state tuition at state universities, even if they were enrolled in DACA. The unanimous decision, which will be released on May 14, says Dreamers don’t have legal status in Arizona, and that’s that.

That’s just common sense – but it could also be really, really costly for state taxpayers.

The state’s three universities – Arizona State University, Northern Arizona University, and the University of Arizona – decided by no later than 2015 that the politically correct thing to do is to give illegal immigrants a tuition break.

Two federal laws – signed by former President Bill Clinton – require that any benefit given to illegals be given to American citizens, according to a new lawsuit filed by three former out-of-state students in Arizona state schools.

The 1996 Illegal Immigration Reform and Immigrant Responsibility Act says that a non-citizen cannot receive “any postsecondary education benefit unless a citizen or national of the United States is eligible for such a benefit…without regard to whether the citizen or national is such a (state) resident.” Clinton’s welfare reform law also limits in-state tuition being given to illegal aliens.

Three out-of-state American citizens, represented by lawyer Lance Entrekin, want the state of Arizona to pay them the difference in tuition – anywhere from $15,000 to $20,000 a year.

And Entrekin wants the state to refund every single out-of-state American who got charged the higher tuition rate. After all, if Arizona universities are giving away tuition breaks to illegals, they should give them to Americans, too, he argues.

There are currently 42,000 out-of-state students in the three Arizona universities. At $15,000-a-year difference, that would cost state taxpayers $600,000 this year alone.

Going back a few years could potentially run into millions of dollars.

Taxpayers already spent $681 million on higher education in 2017. But thanks to PC liberals in their ivory towers, they may have to pay millions more.