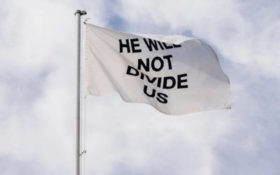 Actor Shia LaBeouf and his radical leftist friends vowed to spend four straight years chanting “He will not divide us!” into a live webcam as a protest against President Donald Trump.

However, LaBeouf’s full-time project quickly fell apart — the liberal celebrity had a total meltdown seven days into the project.

Police arrested LaBeouf in New York City on Jan. 27th for assaulting another man, presumably a Trump supporter, during the stream and two weeks later on February 10th the controversial “art” protest was shutdown.

But that was just the beginning.

LaBeouf restarted the project after relocating it to Albuquerque, New Mexico on February 18th… where it was again promptly shut down, this time for reports of gunfire in a nearby neighborhood.

Frustrated, LaBeouf relaunched the liberal performance piece on March 8th so he wouldn’t have to appear on camera anymore — and replaced the mindless liberals chanting with a simple video of a flag that read “He will not divide us” flying in an unmarked location.

LaBeouf made the mistake of bragging to Trump supporters on the internet that the flag would fly unmolested for the “duration” of Trump’s presidency — a challenge that was accepted by users of the online forum 4chan.

So began the first round of what has been called the world’s greatest game of capture the flag.

Trump supporters online began tracking airplane flight paths in the background of the live web video, and at night used star maps to triangulate the location — and within days, identified that the first flag was in a field in Tennessee. 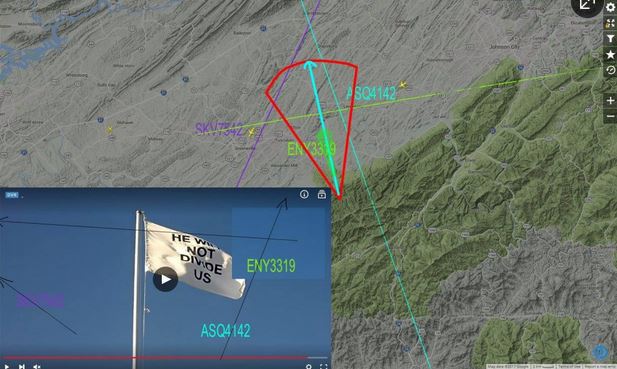 Once the chat forum had the general location, they had a local user drive near the suspected area and honk to confirm they could hear him through the live feed.

In the middle of the night the pranksters struck. They took down the “He will not divide us” flag — and replaced it with a “Make America Great Again” hat.

Furious, LaBeouf immediately cut the stream… and decided to take the next flag to where no one could get to it.

LaBeouf reopened the live stream Wednesday on another “He will not divide us” flag. This time, LaBeouf upped the scales — and took his protest international.

Behind a locked door on the roof of the five-story Foundation for Art and Creative Technology building in Liverpool, U.K the live stream reopened.

But not even that was safe.

Within 24-hours of the new live stream, it was reported that two men scaled to the roof of a nearby building and made their way to the flag.

Photo of masked men traversing rooftops, one of which was seen in #HeWillNotDivideUs video clip I posted earlier pic.twitter.com/9oNv1tU4aM

One of the men appeared in the video feed to the delight of Trump supporters.

After the flag was stolen, the flag pole was unceremoniously removed by the art building and the live stream was cut within an hour.

In the international game of capture the flag, it seems the score is —

There has been no announcement from LaBeouf if his liberal “art” protest will be permanently discontinued, or will be again relocated.

One thing is clear, though — it is unwise to challenge Trump supporters to a game of capture the flag.

Not even the Atlantic Ocean will stop them.