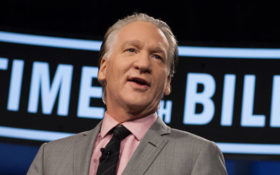 What kind of jerk would actively ROOT for the U.S. economy to tank, ruining the lives of millions of hard-working Americans?

In another case of a wealthy liberal who hates President Donald Trump more than he loves America, the “Real Time” host said he wants the nation to suffer.

He doesn’t care that the economy is the strongest it’s ever been, with the New York Times even announcing that they “ran out of words” to describe how good it is.

He doesn’t even care that a big crash would hurt innocent people.

All he cares is that it would hurt TRUMP.

“I feel like the bottom has to fall out at some point, and by the way, I’m hoping for it because I think one way you get rid of Trump is a crashing economy,” he said last week. “So please, bring on the recession. Sorry if that hurts people but it’s either root for a recession, or you lose your democracy.”

Easy for him to say.

This snob is “sorry” if it hurts people knowing full well that the economy could crater tomorrow and he’d be just fine. He earned $10 million a year from HBO, which has stuck with him through the kinds of controversies that would get anyone else canned in a heartbeat.

Viewers on the left have wanted him gone for any number of reasons, including his use of the “n” word on the air earlier this year.

“HBO needs to fire Maher. He is never going to change,” author Ruben Navarrette wrote at the time. “Getting rid of him is the right thing to do. And it would send the message that, even in comedy, decency counts for a lot, and some things are no laughing matter.”

Maher issued a lukewarm apology and his job was saved.

“I regret the word I used in the banter of a live moment,” he said. “The word was offensive and I regret saying it and am very sorry.”

When Roseanne lost her show last month, many on the right were quick to point out the hypocrisy of Maher remaining on the air despite his relentless off-color insults, many of which are aimed at the president and his supporters. Maher, a shameless atheist, also constantly attacks other conservative values, including faith.

Even if Maher is finally given a long-overdue pink slip, he still wouldn’t feel the sting.

He has an estimated net worth of a cool $100 million, according to Celebrity Net Worth.

Maher would make out just fine in a recession.

Ordinary hard-working Americans – and, quite likely, his liberal viewers – would be in for a world of hurt.

Others in the media called him out over the outrageous comments.

“Bill Maher is wrong to root for a recession – and it hurts progressives that a so called progressive like millionaire Bill Maher is rooting for Americans to suffer,” wrote comic and CNN contributor Dean Obeidallah.

Fox News elder statesman Brit Hume said it’s a case of “Trump Derangement Syndrome,” or when media leftists get so out of whack over Trump that they become deranged.

Piers Morgan had an even blunter assessment of Maher’s comments.

“Bill Maher would rather America goes into recession than Trump succeeds,” he wrote on Twitter. “There’s a word for that – treason.”