Liberal celeb: "Blood in the streets" if Dems lose (outrageous!) - The Horn News 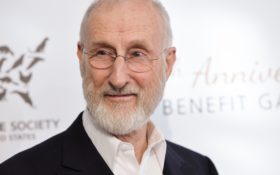 Liberal actor James Cromwell issued a stern warning for Americans — Democrats better win the midterm elections, or else there will be “blood in the streets” and violent revolution against conservatives.

Cromwell was receiving an honor at the fourth annual Carney Awards and he used his platform to warn America of the violence that will occur if voters decide to keep Republicans in power next week.

Speaking to Variety on the red carpet at the awards show, Cromwell shared his violent views on the current political environment. “This is nascent fascism. We always had a turnkey, totalitarian state — all we needed was an excuse, and all the institutions were in place to turn this into pure fascism,” he said Sunday night.

“If we don’t stop [President Donald Trump] now, then we will have a revolution for real. Then there will be blood in the streets,” he warned.

Later on during his acceptance speech, Cromwell continued his statement, adding, “We’re living in very curious times, and something is coming up which is desperately important to this country and to this planet, and that is an election, in which hopefully in some measure we are going to take back our democracy,” he said.

“We will have a government that represents us and not the donor class. We will cut through the corruption, [and] we won’t have to do what comes next, which is either a non-violent revolution or a violent one, because this has got to end,” he concluded.

After his speech went viral, Cromwell decided to walk back his comments on Tuesday saying that his remarks on a imminent “revolution” were “taken out of context.”

Not promoting violence, voting against it. You will never see me raising a fist. I’m a pacifist. My words were taken out of context. I’m worried about the blood of the dissent, protesters, more children shot at school, people shot while praying, for who they love and who they are

The blood of protestors. I was not calling for the left to violently attack – the quote was pulled out of a longer statement. I will be writing a statement to give context to that remark.

The star claimed that he was referring to “the blood of protesters” and not actually “calling for the left to violently attack” any Republicans.

Unfortunately for Cromwell, the damage was already done and many Twitter users slammed the actor for back pedaling on his comment only after receiving threats of his own.

Cromwell’s behavior is a new low for the liberal celeb — and he should be ashamed of himself for promoting violence against Americans who do not share the same beliefs as him.

As the left continues to become more violent and unhinged, it is time for conservative Americans to take a stand and make their voices heard by placing their vote in the midterm election.