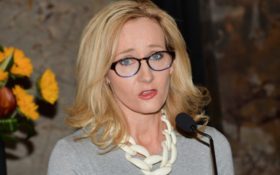 Rich, know-it-all celebrities are at it again. But this writer was just silenced by a documentary filmmaker, and what he said perfectly sums up what we’ve all been waiting to tell every big-mouthed leftist celeb since Trump’s election.

Yes, watching Piers Morgan being told to fuck off on live TV is *exactly* as satisfying as I'd always imagined. https://t.co/4FII8sYmIt

While Rowling and Piers got into an intense Twitter feud, which can be seen in full here, the real victory goes to documentary film-maker Mike Cernovich.

Cernovich jumped into the conversation with the greatest suggestion yet for the multi-mansion owning billionaire liberal celeb:

Hi @jk_rowling, I will personally buy plane tickets for up to 100 refugees to live in your mansions for a year. How do we make this happen?

Cernovich followed with a poll revealing majority of Americans agree Rowling should personally take in the refugees:

The people have spoken, @jk_rowling. Tear down those mansion walls! pic.twitter.com/KyKLX3cqDm

And then the proposal snowballed, with multiple other conservative thinkers and twitter users agreeing to fund refugee flights to stay in Rowling’s mansion.

Another twitter user pointed out his desire to send more refugees to stay at Rowlings:

@markkayeshow @Cernovich @jk_rowling I am in for a half dozen.. wish I could do more but the Obama economy dealt me a small financial blow!

Cernovich reminded Rowling of the popularity of his suggestion late Tuesday:

The response from Rowling?

Nothing. It has been totally silent.

Looks like she isn’t as pro-refugee as she once claimed to be.