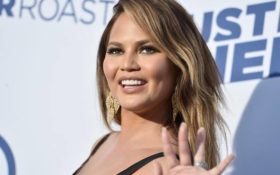 Celebrity Chrissy Teigen is not happy with President Donald Trump — and this liberal snowflake seems to be in a full meltdown.

Teigen is so upset by the Trump administration, she claims to have developed serious anxiety disorders over the past few months — and says she is on at least one medication to take the edge off.

The aging model, most famous for marrying singer John Legend, went on Twitter to demand Trump pay for her botox treatment.

“So fucking tired of this manically insane, incompetent president and this dumpster fire administration I’m gonna have to go on another med,” Teigen said late Wednesday, adding, “That is not a joke. I think I need to either up my dosage or talk to my doctor to ‘see what works for me’ when the world explodes.”

Yikes. And that’s not all.

Teigen also revealed she’s receiving botox injections (for her jaw muscle, Teigen claims) — and thinks Trump should have to pay for her medical bills.

Today I had a tooth shaved down because crippling anxiety makes me grind and rock my teeth on one side. I blame trump.

I also had Botox in my jaw muscle to relieve tension from constantly clinching. I was not like this before. Pay my bill, POS POTUS

Fox News’ Greg Gutfeld weighed in on Teigen’s meltdown Thursday: “For many people, Trump hate is an all-or-nothing proposition — he’s either a monster, or you’re wrong about him being a monster — which creates unnecessary certainty in your brain.”

“Nothing is as bad as you think. Nothing is as great, either. Life’s usually right in the middle, pleasing you and disappointing you at the same time,” Gutfeld said, and told Teigen and others to “lighten up.”

“This Trump effect can be debilitating. I may list it as a preexisting condition,” Gutfeld said.

Sean Hannity, another Fox News host, has hinted he has serious dirt on Teigen. Thursday, he told Fox Business’ Lou Dobbs, “I have a story.”

Hopefully, Teigen gets the mental help she needs.

She has another four long years to go.