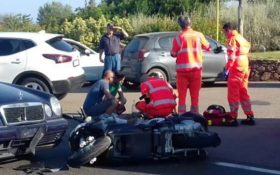 Actor George Clooney was taken to the hospital in Sardinia and released after his motor scooter and a car crashed on a state road on the Italian island Tuesday, hospital officials said.

“He is recovering at his home and will be fine,” Clooney spokesman Stan Rosenfield told The Associated Press in an email.

The John Paul II hospital in Olbia confirmed Clooney was treated there and released after Tuesday’s accident, in which Clooney’s scooter and a blue Mercedes sedan collided along a curve in the road.

Local media representatives who had gathered at the hospital said the Oscar-winning actor-director left in a van through a side exit.

Daily newspaper La Nuova Sardegna said the 57-year-old Clooney was heading to a film set when the Mercedes hit his motorbike at a curve in the road near the entrance to the Costa Corallina residential compound, in the province of Olbia.

Surveillance video of the crash can be seen here.

An oil stain and police paint remained on the road Tuesday; photographs taken by someone passing the scene showed the car’s front right bumper damaged and Clooney’s bike on its side.

He was staying in a lush, gated rental villa in the high-end Puntaldia neighborhood on Sardinia’s northeastern coast, which overlooks the Tyrrhenian Sea. Staff at the home declined to comment.

Clooney is a frequent visitor to Italy. He has a home on Lake Como and was married in Venice in 2014 to the British human rights attorney, Amal Clooney.