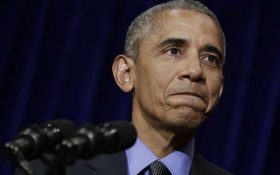 Former President Barack Obama was heavily criticized throughout his two-terms in the White House for “misleading” the American taxpayer.

In other words, his approval rating was in the toilet for years — and he constantly tried to lie his way out of it.

Now that President Donald Trump is in charge, however, the layers of lies are beginning to be peeled back — and it starts with the IRS.

Thursday, the Treasury Inspector General for Tax Administration released a report on IRS actions in support of the Affordable Care Act — and what they found was a series of lies and misinformation made up by the White House under Obama.

“IRS officials sent the letters to try to prod Americans to comply with the 2010 health law’s ‘individual mandate’ that penalizes them for not holding coverage,” according to The Washington Times. “But as part of the letters, the IRS said most people could find plans for $75 a month or less once government subsidies were figured in.”

That was a lie, Thursday’s audit found — and Obama knew it.

“Many of the nearly 7.5 million taxpayers who receive letters and seek insurance may feel misled if the actual cost of their insurance is much higher than the $75 per month detailed in their notification letter,” the inspector general’s audit discovered.

The IRS claims they used numbers provided by the Department of Health and Human Services — but declined to produce any documented proof to the auditors.

Investigators found the intentionally misleading information during a sweeping audit of the tax agency under Trump.

Investigators want to know how the IRS was handling it’s responsibilities to alert Americans about Obamacare’s insurance tax penalty.

Unfortunately, despite misleading 7.5 million Americans on the true cost of healthcare under Obama’s plan, experts say it’s unlikely criminal charges will come from the incident.

Obama’s critics can take pleasure, however, knowing that at least a few more of his administration’s lies has been exposed.