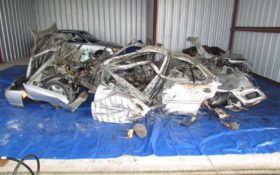 A man used homemade explosives to blow up a car last weekend, killing himself, his toddler son and an adult friend in a grisly murder-suicide whose planning he described in angry letters sent to police and family members, investigators said Thursday.

Jacob Schmoyer, 26, sent the letters shortly before the blast in Allentown that killed him, his 2-year-old son Jonathan “J.J.” Schmoyer, and a friend, 66-year-old David Hallman, authorities said. One letter was delivered Tuesday, the rest on Wednesday, and were dated Sept. 29, Special Agent Don Robinson of the Bureau of Alcohol, Tobacco and Firearms said.

“He was miserable,” Robinson said. “Basically, the four letters described a miserable life, he was unhappy with himself. … He admitted to a number of criminal acts, and he didn’t think it was going to get any better. There was a lot of hatred there, some directed at Mr. Hallman and some at his son.”

The crimes he admitted to included petty thefts and burglaries, Robinson said.

It wasn’t clear why Schmoyer targeted Hallman, but Robinson said Schmoyer “lured” the man to his vehicle on the night of the blast, which scattered debris and body parts over a wide area and forced the closure of several city blocks for days.

“There’a a lot of anger, there’s a lot of vitriol in the letters, and he was very meticulous about wanting to make sure that we knew how he put this thing together,” Robinson said.

The investigation showed the homemade device, composed of two unspecified explosives, was either in the center console of the vehicle or near the passenger seat. Schmoyer was in the driver’s seat, Hallman in the front passenger seat and the toddler in a car seat in the back.

Schmoyer’s grandmother, Kathleen Pond, told WFMZ she received one of Schmoyer’s letters on Wednesday. She did not detail its contents, but said, “I really did believe he would never do this, maybe in my heart I knew he would do it to himself, but never to J.J.”

Shannon Rehrig, the aunt of Jonathan Schmoyer, called his father “evil” in an interview with The Morning Call of Allentown, adding that Jacob Schmoyer wrote in one of the letters that he “had something against autism, which he suspected J.J. had.”

Lehigh County Coroner Scott Grim said all three died from traumatic injuries related to the explosion, which took place on a densely populated city block about 9:30 p.m. Saturday. Officials said it was miraculous that no one else was killed, especially with thousands of people attending a minor league hockey game two blocks away.

“He knew that he also was putting a lot more people at risk,” said Assistant U.S. Attorney John Gallagher.

Some residents in the area were able to return to their homes Wednesday afternoon, but the owners of a few homes heavily damaged in the blast might not be able to return for several more days, Assistant Chief Gail Struss of the Allentown police told The Morning Call.