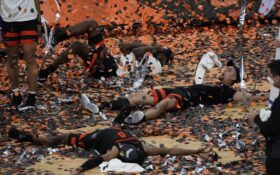 The 68 teams whose names popped up in the March Madness bracket only thought it was time to celebrate: The next four or five days figure to be the most nerve-wracking part of their seasons.

Welcome to Bubble Ball — the NCAA Tournament is being played in a pandemic, where no player can show up for the games in Indianapolis without seven negative COVID tests, and no team is really “in” the tournament until the ball is tipped off.

“Which potential season-ending test was more stressful than the other?” Drexel coach Zach Spiker said, meaning the challenges that still await. “Testing, practice, getting on the bus in Philadelphia, waiting for that reply, that response time to say, ‘We’re all negative here. OK, let’s get out of here. Let’s get to Indianapolis.’”

Because of COVID—19 issues, Drexel played a grand total of 19 games — about 11 fewer than usual — en route to the Colonial Athletic Conference title. That earned the Dragons an automatic bid into the tournament. The reward? in addition to a battery of nasal swabs, they get a No. 16 seed and an opening-round meeting with top-seeded Illinois.

The other top seeds were Michigan, Baylor and Gonzaga, which is the overall No. 1, and a 2-1 favorite to win it all and complete the first undefeated season since the 1976 Indiana Hoosiers.

In the biggest adjustment to a normal March Madness, all the games will be played in and around Indianapolis over 19 days. No more worrying about who got shipped to Spokane or mired in Memphis. The NCAA did, however, keep the region names — West, East, South and Midwest — to at least make the bracket look normal.

More about that bracket: A few bubble teams are coming from unexpected places, namely UCLA and Michigan State. Both were widely projected to make the field with ease, but they ended up as 11 seeds, paired in a First Four matchup on Thursday. The other 11-11 game pits Wichita State against Drake.

Teams like Louisville, Saint Louis, Colorado State and Mississippi would gladly trade places with them. And still might. In one of many first-of-its-kind moves made to accommodate a one-of-a-kind tournament, the NCAA put team Nos. 69-72 on standby in case a program in the 68-team draw has to withdraw because of a COVID-19 outbreak.

They have until Tuesday night to notify the NCAA they can’t make it. After that, a team that withdraws will simply go home, and its opponent will get a walkover into the next round.

“If the teams continue to do the great work that they’ve done just to get to the tournament, we will have a very safe, very healthy 67-game tournament and we’ll crown a champion,” selection committee chairman Mitch Barnhart said.

But to underscore what a different, and difficult, season this has been, the committee spent a lot of time stressing over two shoo-ins, Kansas and Virginia, each of which pulled out of their conference tournaments last week because of outbreaks.

Barnhart said both are following proper protocols to make it to Indianapolis for their games on Saturday. Kansas is the No. 3 seed in the West and Virginia, the defending champion (from 2019), is the fourth seed in the same region.

“The one thing I’ve found out through this, probably as much as anybody, is expect the unexpected,” Kansas coach Bill Self said.

That is, after all, what March Madness is about — three weeks filled with busted brackets, out-of-nowhere surprises, teams that take care of unfinished business and an occasional visit from an old friend.

Remember Sister Jean? She’s 101 now, and her team, Loyola Chicago, is back in the dance, hoping for a reboot of the, shall we say, “miracle” run to the Final Four in 2018.

Remember Patrick Ewing? He lifted Georgetown to national prominence back in the 1980s, and now he’s back as the coach, guiding the underdog — yes, underdog — Hoyas to a Big East Tournament title and a surprise trip to the tourney.

And Rick Pitino? His career was left for dead after his ouster from Louisville following that school’s unseemly recruiting scandal a few years back. He’s back, too, as coach of Iona, which played only 13 regular-season games, but won its conference tourney and made it to Indy. The Gaels are a 15th seed — not what Pitino is used to this time of year.

“A little role reversal,” he said, “but still you have to play the game.”

And play they will. From the First Four on Thursday through the Final Four, which ends with nets the coming down on April 5.

So much could go wrong between now and then. So much has to go right.

But a year after the tournament was scrubbed in the early days of the pandemic, it feels good to have a bracket to fill out.

Even if it feels a little different.