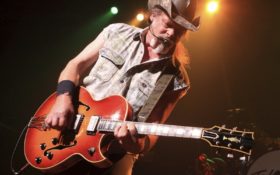 Nugent says high school student David Hogg and his classmates are “not very educated” and “wouldn’t know an AR-15 from a pterodactyl.”

The longtime member of the National Rifle Association’s board of directors spoke Monday on the “Curtis and Cosby” show on New York’s WABC Radio, continuing a tirade against the students.

Hogg says it’s “time to love thy neighbor, not mudsling at children.”

Hogg and other student activists haven’t responded on Twitter to Nugent’s latest comments.