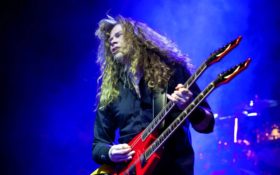 Megadeth’s Dave Mustaine says he has been diagnosed with throat cancer.

The singer and guitarist of the heavy metal band announced the news on social media Monday, writing that he’s “working closely with my doctors, and we’ve mapped out a treatment plan which they feel has a 90% success rate. Treatment has already begun.”

The 57-year-old says as a result, Megadeth has to cancel “most shows this year,” though the 2019 Megacruise will happen “and the band will be a part of it in some form.”

Mustaine adds he and his bandmates, David Ellefson, Kiko Loureiro and Dirk Verbeuren, are in the studio working on a new album. It will be the follow-up to 2016′s “Dystopia,” which won the band their first-ever Grammy Award in 2017.