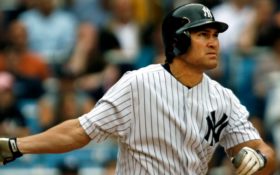 Former MLB star Johnny Damon was eliminated from ABC’s “Dancing with the Stars: Athletes” on Monday night — but that did not stop him from sending praise to his friend, President Donald Trump, on Fox News.

“I think Donald’s doing a great job of trying to bring everything to the table, just work at something instead of wasting people’s time,” Damon told Fox News.

The legendary player, who won a World Series ring with both the Boston Red Sox and the New York Yankees, also hinted that he and the president have an exciting project in the works.

“Some big news is coming out on me later on this week so it should be pretty good,” Damon said.

Damon is a former contestant on NBC’s “Celebrity Apprentice” from early 2015. Although he was fired by Trump on the show, he and the president remained good friends.

“I know him personally, and I know he’s a great guy,” Damon told Fox News.

He even explained that he could give Trump a ring directly if he wanted to.

Damon helped to campaign for Trump when he was just a presidential nominee during the 2016 election.

At a rally in Orlando, Damon told the crowd, “People wonder why I like Donald Trump. I actually love the guy. Why? Because he likes winners, he likes to win, he likes everything to be great. Not just for him, but for everybody, and he wants to make America great again.”

Since ending his baseball career, Damon has begun working with various charities and supporting the Wounded Warrior Project. He said of Wounded Warrior, “I continue to give them a hand whenever they need it. My dad was in the military and it was very important for our lives because we had free medical, a big family, and that’s why we appreciate our country, the US of A, so much.”