Leaning lighthouse tower could collapse into the sea - The Horn News 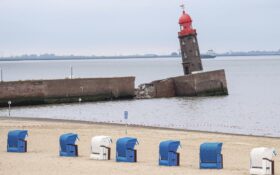 An iconic lighthouse at the northern German port of Bremen has tilted sideways and could soon topple over entirely, officials said Thursday.

Public broadcaster Radio Bremen quoted the head of the water police, Uwe Old, as saying that nothing could be done to save the lighthouse.

“Unfortunately, I think the tower is going to be history in the coming days,” he said.

Authorities have banned ships from entering the Geeste River at Bremerhaven because of the risk posed by the leaning lighthouse, which is located at the end of a stone jetty that has long required repair.

But port operator Bremenports said it planned to allow commercial ships entry again soon. If the lighthouse doesn’t topple by itself, the company said it would tear it down over the weekend with the aim of replacing it with an identical structure.