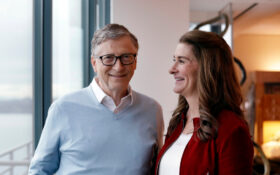 More drama has been uncovered following the fallout in the divorce of Bill Gates and his now estranged wife Melinda.

Wall Street Journal is reporting that Mr. Gates was once involved in an affair with a Microsoft employee.

According to insider reports, the billionaire Microsoft founder sought a relationship with a company engineer that took place in the year 2000.

In 2019 — nearly 20 years later — the Microsoft board caught wind of the alleged sexual relationship after the employee involved wrote a letter confessing the details of her relationship with Gates.

New York Post purportedly said that the woman had two demands in writing the letter: That changes were made to her job with the company, and that Melinda Gates read the letter. NYPost writes that it is not known whether or not Melinda read the letter.

“There was an affair almost 20 years ago which ended amicably,” confessed a Microsoft spokesman.

According to the WSJ report, the Microsoft board then hired a law firm to look into the alleged relationship. Internal concerns were whispered that Gates should step down from his position in the company.

A spokesperson for the company confirmed the investigation.

“Microsoft received a concern in the latter half of 2019 that Bill Gates sought to initiate an intimate relationship with a company employee in the year 2000,” the spokesperson said.

And although he was re-elected to the board that year, he resigned “before the investigation could be completed.”

“A committee of the Board reviewed the concern, aided by an outside law firm to conduct a thorough investigation. Throughout the investigation, Microsoft provided extensive support to the employee who raised the concern” — according to the spokesperson.

But the spokesperson has denied that the investigation is the reason Gates ultimately stepped down from his post.

“… He had expressed an interest in spending more time on his philanthropy starting several years earlier.”

The timing is certainly odd to us at The Horn News.