Leak detected in another European pipeline - The Horn News 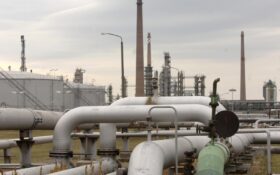 A leak was detected in an underground oil pipeline in Poland which is the main route through which Russian crude reaches Germany, the Polish operator said Wednesday.

The operator, PERN, said it detected a leak in the Druzhba pipeline on Tuesday evening about 70 kilometers (45 miles) from the central Polish city of Plock.

It said the cause of the leak wasn’t known. The incident follows leaks late last month in the Nord Stream 1 and 2 gas pipelines running along the Baltic seabed, and amid an energy standoff between Russia and the West.

A Polish government security official, Stanislaw Zaryn, said the leak could be the result of an accident, but that officials were still investigating and looking at another possible explanations.

“Different scenarios are possible. We don’t exclude any of them,” he told The Associated Press.

The Druzhba pipeline, which in Russian means “Friendship,” is one of the world’s longest oil pipelines, and after leaving Russia it branches out to bring crude to points including Belarus, Ukraine, Poland, Hungary, Austria and Germany.

Firefighters were working in cornfields near the village of Zurawice to determine the exact point of the leak, according to a spokesman for firefighters, Brig. Karol Kierzkowski. He told the state news broadcaster TVP Info that approximately 400 cubic meters of spilled crude had been pumped out, and transmission along the line had been blocked.

Germany’s Economy Ministry said that Berlin’s supplies are currently secure, with two German refineries continuing to receive supplies via the Druzhba pipeline. It said that reserves at those two refineries have been increased in recent weeks, and that both can, if needed, be supplied via the German port of Rostock and the Polish port of Gdansk.

Last year, Russia accounted for around 35% of Germany’s crude oil supply. But that proportion has been reduced following Moscow’s invasion of Ukraine, and Germany’s focus now is on phasing out the remaining supplies before a European Union embargo on most Russian imports goes into effect.

A month ago, the German government took control of three refineries owned by Russian energy company Rosneft, which account for about 12% of Germany’s oil refining capacity.