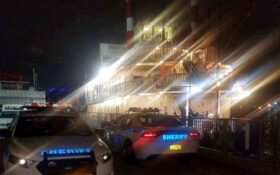 A New York City party cruise with more than 170 people on board was met by police when it returned to shore over the weekend, leading to the arrest of the captain and two owners.

The Saturday evening boat cruise violated social distancing orders, the New York Sheriff’s Department said in a tweet, and was serving alcohol on board without a liquor license.

The four-story boat, the Liberty Belle, returned to Pier 36 in lower Manhattan at around 11:30 p.m. where officers arrested the captain, Joseph Spadaro, and two owners who organized the party, Ronny Vargas and Alex Sauzo, the New York Daily News reported.

Party-goers posted videos and photos of themselves drinking and dancing without masks or social distancing at the 1920s-themed party, the newspaper reported.

Manhattan borough President Gale Brewer’s office notified the sheriff’s department of the crowded party. Empire Cruises, which runs events on the boat, did not return requests for comment from the newspaper. A notice on its website says it has ceased operations since March 16.

Suazo did not immediately return a voicemail, and a phone listed for Vargas was not answered. A person answered a number listed for Spadaro on Staten Island but said it was a wrong number.

A large crowd also gathered on Saturday night under the Kosciuszko Bridge that connects Brooklyn and Queens in Long Island for a dance party, the New York Post reported.

Photos and videos on social media show some dancers wearing masks, but standing close together.