Trump's move could lead to free insurance (liberals are not happy!) - The Horn News 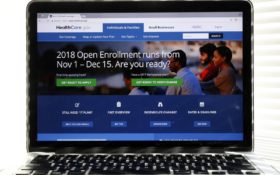 If President Donald Trump prevails in shutting down a major “Obamacare” health insurance subsidy, it would have the unintended consequence of making free basic coverage available to more people, and making upper-tier plans more affordable.

What’s driving the predictions? It’s because another of the health law’s subsidies would go up for people with low-to-moderate incomes, offsetting Trump’s move.

According to one estimate, more consumers would sign up for coverage next year even though Trump says the Affordable Care Act is “virtually dead.”

On Wednesday, the fate of the health law’s subsidy for copays and deductibles remained unclear as a bipartisan congressional deal to continue payments ran into political roadblocks. Separately, state attorneys general asked a federal court to order the administration to keep the money flowing.

But if Trump succeeds, it may be like pushing down on one end of a see-saw only to see the other end go up.

His attempt to shut off the subsidy for copays and deductibles would cause a different subsidy to jump up, the one for premiums.

The Obama-era health care law actually has two major subsidies that benefit consumers with low-to-moderate incomes. The subsidy Trump targeted reimburses insurers for reducing copays and deductibles, and is under a legal cloud. The other subsidy is a tax credit that reduces the premiums people pay, and it is not in jeopardy.

The subsidy for premiums is designed to increase with the rising price of insurance. So government spending to subsidize premiums would jump.

“This is where the counting gets sort of weird,” said Matthew Buettgens, a senior research analyst with the Urban Institute.

The nonpartisan policy research group has estimated that richer premium subsidies could entice up to 600,000 more people to sign up for health law coverage, depending on how insurers and state regulators adjust.

The group also found that the federal government would end up spending more overall on health insurance through higher premium subsidies.

That hasn’t been lost on officials at the state level.

“It means many more Californians and people across the country will get a zero-premium bronze plan,” said Peter Lee, executive director of Covered California, the health insurance marketplace in the nation’s most populous state.

“Bronze” is the health law’s basic coverage level. “Silver” is the mid-range standard plan and the most popular. “Gold” is close to employer health insurance in value.

In addition to free bronze plans, many consumers would be able to buy a gold plan for about the same monthly premium as silver coverage, Wyman and the Urban Institute concluded.

Other states where consumers could see zero-premium bronze plans include Florida, Georgia, Illinois, Mississippi, Pennsylvania, Utah and Wyoming, according to an industry estimate.

It’s complicated, but here’s why:

— First, the subsidy for copays and deductibles is provided only if you have a silver plan.

— Next, the other subsidy, the one for premiums, is pegged to the cost of a lower-priced silver plan.

In California, regulators instructed insurers to increase premiums for silver plans sold on the public marketplace to account for the loss of the subsidy for copays and deductibles.

Premiums for bronze plans and gold plans were shielded from that increase.

But because the federal subsidy for premiums is tied to the cost of a silver plan, that subsidy will be higher for everybody whose income qualifies them for financial assistance.

So consumers can use their richer premium subsidy to get a bronze plan for no monthly cost or very little, or a gold plan for much less than they would pay now.

Lee, the California official, said he believes regulators in close to half the states have taken a similar approach.

Final premiums for 2018 have not been officially unveiled yet, and some states are still making adjustments. Sign-up season starts Nov. 1.