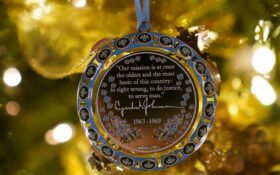 Her sister Lynda, the eldest of President Lyndon B. Johnson’ s two children, was about to get married at the White House, and the president spent the days leading up to Christmas racking up miles on a last-minute trip to Australia, southeast Asia and Europe. He also looked forward to spending the holiday with his infant grandson, Patrick, Luci’s child.

Those memories and more come rushing back when Luci Baines Johnson looks at this year’s annual Christmas tree ornament from the White House Historical Association. It honors her father.

The holidays are a time for “remembering, remembering the people you love, trying to make sure you reach out to them,” she told The Associated Press. “So to have the White House Historical Association remember the people my sister and I loved and say that they value them is a extraordinary gift to us.”

The 2021 official White House ornament — 41st in the series — honors President Johnson with its reproduction of a painting of the Blue Room tree the family had in December 1967. Johnson’s wife, Lady Bird, had commissioned the watercolor for that year’s White House Christmas card.

The back of the ornament features Johnson’s quote that “our mission is at once the oldest and the most basic of this country: to right wrong, to do justice, to serve man.”

Every year since 1981, when first lady Nancy Reagan first gave approval, the historical association has designed an ornament honoring a president or a key White House anniversary.

The association is working its way through all 46 presidents; Johnson was the 36th.

The 2022 official ornament will honor Richard Nixon, the 37th president, with a design set to be unveiled at his presidential library in Yorba Linda, California, on Presidents Day.

Ornament sales are a major source of money for the nonprofit, nonpartisan historical association, which was created in 1961 — 60 years ago — by first lady Jacqueline Kennedy to help pay for White House restoration and acquisition projects.

The ornaments have become collectibles, with about 1 million now sold annually, the association said. Sales figures were not provided.

Stewart McLaurin, president of the association, said it used to be that people in Washington would pop into the association’s gift shop near the White House to buy ornaments to give away as Christmas presents.

That still happens, he said. But with the reach of the internet, “now we get orders from literally all over the country and around the world with people buying them. And once you start giving them to someone, it’s really hard to stop. They always expect to get the one the next year.”

The White House is not involved in designing the ornaments, which since 1981 have been made by ChemArt, a veteran-owned company in Lincoln, Rhode Island.

So what happens when the association runs through every president? McLaurin speculated that the series would be reset to George Washington and start over with a new set of ornaments.

The ornaments that go on to become best-sellers depict either the White House or a Christmas tree. “Those have been the two icons that seem to be the most popular,” McLaurin said.

The 2019 White House Christmas ornament is one of those that depicts the White House, specifically the south side, to honor President Harry Truman. He added the Truman balcony to the top floor as part of a major renovation and expansion of the executive mansion during his presidency.

Clifton Truman Daniel, Truman’s oldest grandson, told the AP that his grandfather took some flak over the balcony addition. But it has become very popular with first families.

First lady Jill Biden said she sometimes hides behind a pillar on the balcony to watch her husband, President Joe Biden, come and go on the presidential helicopter. Johnson’s daughters, Luci Baines Johnson and Lynda Johnson Robb, recently joined Jill Biden to hang the ornament for their father at the White House.

Truman, of course, is known for more than a balcony. Among his accomplishments is a plan to aid the economic recovery of western Europe after World War II.

But as Daniel noted, “it’s very hard to put the Marshall Plan on an ornament.”