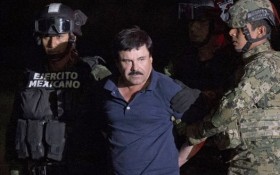 He’s locked up all day. His wife can’t visit him. He can’t call anyone, except his lawyers.

Apparently that’s too tough for Joaquin “El Chapo” Guzman, the notorious Mexican drug lord and escape artist that was recently extradited to the United States to face justice.

Guzman’s complaints were outlined Friday by defense attorneys in a failed bid to get a judge to loosen the strict conditions.

Guzman smiled at his common-law wife, Emma Coronel, as he was led into the Brooklyn courtroom under heavy guard by deputy U.S. marshals at his second court appearance since being brought to the United States on Jan. 19.

“This was so far the only way she has been able to see him,” defense attorney Michelle Gelernt said afterward with a silent Coronel at her side.

Guzman, 59, has pleaded not guilty to charges of running a massive drug trafficking operation that laundered billions of dollars and oversaw murders and kidnappings. He’s being held at a high-security federal jail in Manhattan, with U.S. officials mindful of how he twice escaped from prison in Mexico, the second time via a mile-long tunnel dug to the shower in his cell.

Defense lawyers complained to U.S. District Judge Brian Cogan on Friday that the restrictions make it difficult for him to make decisions with them about how to fight the charges. They claimed his jailers are so zealous, they denied him water during a recent meeting with the defense team.

“I don’t think there’s any thought that if I have the guards give him a glass of water during a three-hour meeting that somehow that’s going to effectuate his escape,” Gelernt told reporters outside court.

But Cogan, after alluding to having secret correspondence with the government about the risks of guarding Guzman, told the defense he wouldn’t weigh in on the jail conditions.

“Based on what I know about this case, there are grounds for extra security measures,” the judge said, with Guzman listening through a Spanish interpreter.

Guzman is due back in court on May 5.