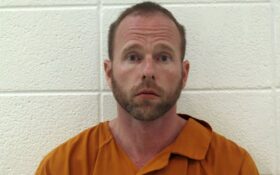 A Kentucky lawmaker who ran for governor last year has pleaded not guilty after he was accused of choking a woman with an ethernet cable and trying to “hog tie” her during a domestic dispute, his lawyer said.

Attorney Conrad Cessna told the Lexington Herald-Leader on Monday that Republican state Rep. Robert Goforth denied the allegations. He is charged with strangulation, assault and terroristic threatening, according to court records.

Goforth was arrested on April 21 after a woman told authorities that he assaulted her while three small children were in the home. She told investigators she escaped after promising to unlock her phone, which sparked the altercation.

Goforth will have a preliminary hearing on June 9, according to court documents.

Goforth was a relative newcomer to the legislature when he decided to challenge then-Gov. Matt Bevin in an aggressive GOP primary campaign last year. He won nearly 40% of the vote, exposing Bevin’s political weakness despite the governor’s backing from President Donald Trump. Bevin never fully recovered from the lackluster showing, and he lost a close election to Democrat Andy Beshear last November.