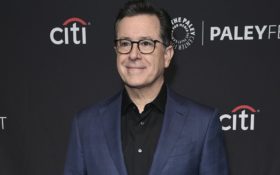 Stephen Colbert will be sticking around for four more years.

CBS announced Thursday that Colbert has signed a new contract that will keep him as the “Late Show” host through at least August 2023. His current pact was set to expire next August.

Terms were not disclosed. But it’s a safe bet Colbert is in line for a healthy raise. He took over for David Letterman in 2015 and currently reigns as the most popular host on late-night television. The “Late Show” averages nearly 4 million viewers each night, with a widening lead over the second-place “Tonight” show with Jimmy Fallon.

Colbert quips that he’s been asked to stay “and I have every intention of honoring their subpoena.”