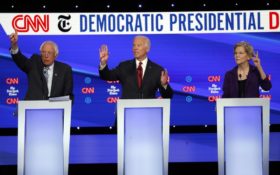 And CNN never called them out for their lies.

Here’s 7 of their most bogus claims from Westerville, Ohio — and how they stack up with the facts:

1. On the topic of withdrawing American troops from Syria…

THE FACTS: The former vice president is wrong. There is no evidence that any of the approximately 1,000 American troops preparing to evacuate from Syria have been fired on by Syrian government forces led by President Bashar Assad. A small group of U.S. troops came under Turkish artillery fire near the town of Kobani last week, without anyone being injured, but there is no indication that Syrian troops have shot at withdrawing Americans.

Also, Biden was addressing the situation in Syria, not Iraq.

2. On the topic of gun control…

PETE BUTTIGIEG: “On guns, we are this close to an assault weapons ban. That would be huge.”

AMY KLOBUCHAR: “I just keep thinking of how close we are to finally getting something done on this.”

Legislation under discussion in the Senate would expand background checks for gun sales, a politically popular idea even with gun owners. But even that bill has stalled because of opposition from the National Rifle Association and on-again, off-again support from Trump. Democrats and some Republicans in Congress say they will continue to push for the background checks bill, but movement appears unlikely during an impeachment inquiry and general dysfunction in Congress. And Senate Majority Leader Mitch McConnell has made it clear he won’t move forward on gun legislation without Trump’s strong support.

Buttigieg was citing the chance for an assault-weapons ban as a reason for not supporting the more radical proposal by Democratic presidential rival Beto O’Rourke to force gun owners to give up AR-15s and other assault-style weapons. Klobuchar spoke in a similar context.

THE FACTS: Economists mostly blame those job losses on automation and robots, not trade deals.

The U.S. economy has been adding a record number of jobs, just that the nature of those jobs has changed as factory work and other occupations have become less prevalent.

Trade with China has contributed to shuttered factories and the loss of roughly 2 million jobs, according to research published in 2014.

But the primary culprit that accounted for 88% of factory job losses between 2000 and 2010 was automation, according to researchers at Ball State University.

Job figures show that the outbreak of the Great Recession in late 2007 also contributed to manufacturing’s decline.

But there is also a bigger threat from automation for workers outside factories. These are secretaries, bookkeepers and a wide array of professions. Automation can displace these workers and put downward pressure on their wages, forcing them to find other jobs.

KAMALA HARRIS: “Five million assault weapons are on the streets of America today.”

THE FACTS: The California senator’s statistic on the number of AR- and AK-style firearms is not accurate. Even the gun industry estimates there are now 16 million “assault weapons” in circulation in the United States today. In 1994, President Bill Clinton enacted an assault weapons ban, at a time when there were an estimated 1.5 million of them in circulation. Current owners were allowed to keep them, however, and once the ban expired a decade later, sales resumed and boomed.

WARREN: “Mueller had shown to a fare-thee-well that this president obstructed justice.”

THE FACTS: That’s not what special counsel Robert Mueller said.

It’s true that prosecutors examined more than 10 episodes for evidence of obstruction of justice, and that they did illustrate efforts by President Donald Trump to stymie what he called an unfair “witch hunt” trying to link him to Russian election meddling.

But ultimately, Mueller never reached a conclusion as to whether the president obstructed justice and said there wasn’t enough evidence he broke any other law to file charges. He cited Justice Department policy and said that since he could not bring charges against Trump, it was unfair to accuse him of a crime.

There was no finding that he obstructed justice.

Figures from the Labor Department show that the former Housing and Urban Development secretary is wrong.

Ohio added jobs in August. So did Michigan. Same with Pennsylvania.

So Castro’s statement is not based on reality — just like the rest of the Democrats he shared the stage with.