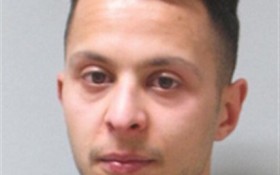 The lone known surviving suspect in the Paris attacks was returned Wednesday to the city where Islamic State extremists unleashed a night of mayhem and charged with a host of terrorism offenses, raising hopes that he may be able to help French investigators trace the pathways of IS fighters thought to be hiding out in Europe.

Salah Abdeslam was whisked in secretly by helicopter after being transferred from the prison cell in Belgium where he had been held since his capture last month. His lawyer, Frank Berton, described a “muscular operation” that had caught even the attorney by surprise, causing him to rush to join his client at Paris’ Palace of Justice.

Berton said Abdeslam was being sent to Fleury-Merogis, a massive, high-security prison about 30 kilometers (19 miles) south of Paris, where he will be held in isolation in a special camera-equipped cell until his next hearing on May 20. French Justice Minister Jean-Jacques Urvoas said earlier that Abdeslam would be placed in isolation, watched by guards specially trained to deal with “people reputed to be dangerous.”

The return of the last known survivor of the team that carried out the Nov. 13 attacks may help investigators untangle some of the still-unresolved questions about the assault, which claimed 130 lives at cafes, a music hall and a sports stadium. The Islamic State group claimed responsibility for the carnage.

Berton told reporters Wednesday that his client “volunteered that he would explain himself at some later date.”

Abdeslam, a French citizen of Moroccan origin, spent four months on the run following the attacks and a month in Belgian custody after being tackled by heavily armed police outside his hideout in the Mollenbeek neighborhood of Brussels.

Abdeslam’s precise role in the attacks has never been clear. The Paris prosecutor said he was kitted out as a suicide bomber, but abandoned his plans and fled to Belgium. Abdeslam’s older brother blew himself up that night at a cafe.

It was at the hideout near his childhood home in Molenbeek that Abdeslam was ultimately captured on March 18. His detention may have prompted other members of the Islamic State cell to rush attack plans already in motion. Four days later, suicide bombers detonated their explosives in the Brussels airport and metro, killing 32 people. Abdeslam had told interrogators nothing about a new plot.

His return to Paris offered solace to victims of the Nov. 13 bloodshed and raised hopes that French investigators would finally be able to trace the pathways of the Islamic State fighters thought to be hiding out in Europe.

“I would like to look him in the eye. If I could even talk to him, it would be important to me,” George Salines, whose daughter, Lola, died at the Bataclan concert venue, told BFM television.

But in a surprising assessment, Abdeslam’s Belgian lawyer downplayed any insight from his client, dismissing him as a “little jerk among Molenbeek’s little delinquents, more a follower than a leader.”

“He has the intelligence of an empty ashtray,” the attorney, Sven Mary, told the French newspaper Liberation. “He is the perfect example of the … generation that believes it’s living in a video game. … I asked him if he had read the Quran and he told me he got his interpretation from the Internet.”

However, Berton described his client as a young man “falling apart” and ready to cooperate.

He told iTele TV that Abdeslam wants to talk, “he has things to say, that he wants to explain his route to radicalization” as well as his role in the attacks — but not take responsibility for the crimes of others.

“That means be judged for facts and acts that he committed but not for what he did not commit simply because he is the only survivor of the attacks,” Berton said.

Testimony from Abdeslam could prove significant to definitively linking events of Nov. 13, which involved three teams of attackers who blew themselves up or sprayed gunfire at the Stade de France sports stadium, cafes and bars, and at the Bataclan. Brussels, and in particular the Molenbeek neighborhood with its large Muslim population, was home to many of the attackers who struck Paris.

Speculation about Abdeslam’s role and place in the hierarchy of the attackers has been rampant. Was he a little guy and a coward or a pivotal figure in the planning and execution of the attacks?

It had been widely suspected that Abdeslam pulled out of his own role as an attacker, something Paris prosecutor Francois Molins confirmed at a news conference, saying he had wanted to blow himself up at the sports stadium but backed down.

Besides the charges in Paris, Abdeslam is also charged in Belgium with attempted murder over a March 15 shootout with police in Brussels. He was arrested three days later and police in Belgium have questioned him about any potential links to the suicide bombers in the Brussels attacks.

Berton, who has taken on tough cases in the past, said in the iTele interview that Abdeslam “has the right to be defended.”

“We’re in a democracy. … We’re not in a totalitarian state,” Berton said.

The case will take years to reach trial, as is standard in French criminal justice, and will involve six magistrates, said Alain Marsaud, who created the country’s anti-terrorism prosecutor and is now a lawmaker on the commission investigating the Nov. 13 attacks.

Marsaud said Abdeslam may prove less important than many hope, and said he expected the suspect — who has already acknowledged a role in the Paris attacks under questioning in Belgium — would cooperate just enough to argue for a lighter sentence.

“I think he is clever enough to try and put one past the judges,” Marsaud said.

Geraldine Berger-Stenger, a lawyer for multiple victims, also cautioned against pinning too much hope on any revelations from Abdeslam.

“I am not in Mr. Abdeslam’s head. I don’t have any expectations for him, unfortunately,” she said. “This person is the key witness but we are perhaps hoping for too much.”

Marsaud noted failures that allowed the Islamic State cell, including many Europeans trained in Syria, to essentially hide out in the open, moving from country to country with impunity.

“We had free circulation of money and goods. OK. But it’s been very expensive,” he said. “We did not create a way to secure Europe in terms of circulation of people.”