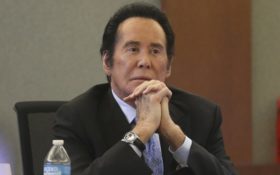 Longtime Las Vegas entertainer Wayne Newton told a Nevada jury on Tuesday that he fired a gunshot to scare away two burglars that he and his wife and their teenage daughter encountered during a second burglary in 10 days at their home a year ago.

“My wife was in hysterics and crying,” Newton said, adding that Kathleen McCrone Newton told him one of the fleeing men raised a tire iron as if to hit her before he used the metal rod to attack one of the family’s large Rhodesian Ridgeback dogs.

“She said, ‘Shoot ‘em. Shoot ‘em. There they are. He almost hit me with the pipe iron,’” the 77-year-old “Danke Schoen” singer said. “I decided to take one shot in the air. That was the last time I saw them.”

The testimony came during trial for Weslie Hosea Martin, a 22-year-old Nevada prison inmate accused of being one of the burglars that night and of also burglarizing the Newton mansion and a neighboring home 10 days earlier. The second suspect in the Newton home burglary has not been identified or apprehended.

Martin’s public defender, Will Ewing, conceded during opening statements that Martin’s face was captured on a doorbell security camera at the neighboring home the night of the first Newton home robbery, on June 3, 2018. The Newtons were in New York at the time.

But the burglars who 10 days later apparently tried to pry open a safe in Wayne Newton’s dressing room had bandanas on their faces and Ewing told jurors that only a vague video image of someone with a similar body shape and size on the Newton home stairway might tie Martin to the break-in the Newtons interrupted.

Martin was arrested last July, after an inventory of items he sold to a coin and jewelry business matched items from the Newton home. He has pleaded not guilty to 11 felonies and faces sentencing as a habitual criminal if he’s convicted.

The Newtons escaped injury. Their dogs were treated by a veterinarian for head injuries and broken teeth.

Under questioning by defense lawyer Chris Peterson, Kathleen Newton acknowledged that in a two-page written statement she gave to police less than three hours after the incident she wrote nothing about having been threatened with a tire iron or crowbar.

She also told police she thought the burglars were “young, Hispanic, maybe African American” but that she first thought they were Hispanic.

Martin, who is black, sat impassively at the defendant’s table wearing a white shirt and blue tie. The trial is expected to last several days.

Martin was convicted of two unrelated previous burglary-related felonies in 2015 and is currently serving up to six years in prison for violating probation and being a felon in possession of a gun.

Wayne Newton used a black cane to walk to the witness stand, where he stated his full name, Carson Wayne Newton, as the courtroom gallery filled with off-duty prosecutors, defense attorneys and several judges in plain clothes.

He is marking his 60th year performing in Las Vegas. He and his family moved to their current home in 2013 following the bankruptcy sale of their nearby 40-acre (16.2-hectare) estate, Casa de Shenandoah.

Newton said he couldn’t identify the burglars during the late June 13, 2018, incident. They disappeared through a hedge toward a wall on his large property in southeast Las Vegas.

Police recovered items on the other side of the wall including coins, a watch, a bottle of Stefano Ricci cologne that Newton identified as his, and one white shoe matching another that remained in Newton’s closet.

After Peterson questioned Newton about being unable to recall how a quote about being angry about the break-ins made it into a media report, Giordani returned to the topic to end Newton’s testimony.

“Let me get this straight,” the prosecutor said. “So, your home is invaded on two different occasions. Your wife’s assaulted with a crowbar. Your dogs are beaten. You’re angry, right?”