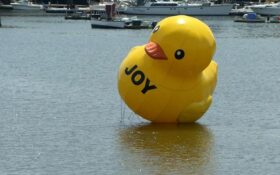 The sudden appearance of a giant rubber duck in a Maine harbor is a whimsical whodunit that’s defied sleuths so far.

The yellow waterfowl emblazoned with the word “joy” appeared in Belfast Harbor over the weekend, and it’s a mystery who put it there.

Harbor Master Katherine Given told the Bangor Daily News that the 25-foot-tall (7 1/2 meter) duck doesn’t pose a navigational hazard, so there’s no rush to shoo it away.

“Everybody loves it,” Given said. “I have no idea who owns it, but it kind of fits Belfast. A lot of people want to keep it here.”

“It’s wonderful,” she told New England Cable News. “Who would expect to see a duck in the middle of the water here?”