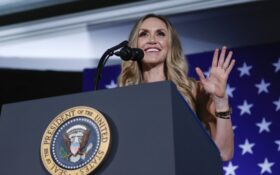 It’s the state his daughter-in-law, Lara Trump, has been rumored to be eyeing a bid for the Senate.

And she recently shed some light on the former president’s political future amid a swirl of rumors in the mainstream media about his next move.

Thursday morning she told Fox & Friends that she doesn’t anticipate Trump to be “installed” as president anytime soon — and Trump doesn’t think so either, despite what The New York Times recently claimed.

It comes on the heels of a New York Times report that the former president has been claiming that he’ll be reinstated in the White House by summer’s end. Liberal journalist Maggie Haberman had reported that Trump has told “a number of people he’s in contact with that he expects he will get reinstated.”

Haberman reported that Trump had been closely paying attention to election audits in both Arizona and Georgia. She said Trump has said the results may conclude in him being inserted back on 1600 Pennsylvania Avenue in August.

“… He is not putting out statements about the ‘audits’ in states just for the sake of it. He’s been laser-focused on them, according to several people who’ve spoken with him,” Haberman claimed.

But he is not putting out statements about the “audits” in states just for the sake of it. He’s been laser focused on them, according to several people who’ve spoken with him (as well as WaPo reporting a few weeks ago).

Veteran host Brian Kilmeade asked, “What about this story, that President Trump is thinking that he’s going to be placed into office in August? Is that true? Has he mentioned that to you?”

“Because I think 24 hours a day all the networks are running with that story.”

Lara Trump questioned the authenticity of the news sources pushing the story.

“I think you should take a look at who those networks are,” she responded, “and who is pushing that story out.”

“As far as I know, there are no plans for Donald Trump to be in the White House in August. Maybe there’s something I don’t know, Brian… ”

You can get a look at the segment below: