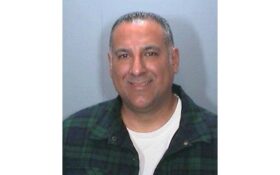 A Los Angeles police officer was arrested for stealing a $29,000 pickup truck from a dealership last year, authorities said.

Police took Officer Matthew Calleros into custody Monday night at the Los Angeles police station where he worked — and where the missing 2015 Chevy Silverado was parked, officials said.

Calleros had been looking at the truck on Oct. 25, 2019, at a used car dealership in the city of Orange, about 30 miles (48.2 kilometers) southeast of Los Angeles, Orange police Sgt. Phil McMullin told The Associated Press.

He allegedly drove it off the lot — but was not doing an official test drive — and never paid for or returned it, McMullin said.

The sergeant said detectives have not determined Calleros’ motive.

Calleros, 45, was booked into the Orange County jail Monday night on suspicion of auto theft and possession of a stolen vehicle. His attorney did not immediately respond to a request for comment.

The LAPD assigned Calleros to home and suspended his police powers, according to a news release.