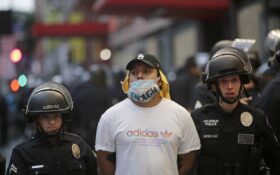 City leaders voted Wednesday to slash the Los Angeles Police Department budget by $150 million, reducing the number of officers to a level not seen for more than a decade amid nationwide demands to shift money away from law enforcement agencies during America’s reckoning over police brutality and racial injustice.

About two-thirds of the funding was earmarked for police overtime and will be used to provide services and programs for communities of color, including a youth summer jobs program. The City Council’s 12-2 vote will drop the number of officers from 9,988 as of last month to 9,757 by next summer, abandoning a goal of 10,000 officers touted by political leaders and only reached in 2013.

“This is a step forward, supporting minority communities in ways in which they deserve — with respect, dignity and an even playing field,” Councilman Curren Price said.

It’s a big change in the nation’s second largest city, where the 1992 acquittal of white officers in the beating of black driver Rodney King set off violent unrest that has been compared to the chaos during some protests over the death of George Floyd at the hands of Minneapolis police.

Other cities around the country also have cut police budgets or are moving to do so, including an effort in Minneapolis to disband the city’s force. New York City lawmakers approved an austere budget Wednesday that will shift $1 billion from policing to education and social services in the coming year. In California, liberal Berkeley passed a budget Wednesday that cuts $9.2 million from police, while Oakland leaders last week slashed $14.6 million from law enforcement and they are considering steeper reductions.

There was no immediate comment from the LAPD. However, Police Chief Michel Moore tweeted Wednesday night that “we remain as resolved as ever to the conversation around reform, and continuing to walk forward together.”

“The success of the city’s future is grounded in bridging the divide, and we will never stop working to do just that,” he wrote.

In a statement last month, Moore had said the cut would require “a top-to-bottom assessment, including how we go about our most basic operations” and said the department already had begun to identify potential cost savings and service reductions.

The move comes a day after the board of the Los Angeles Unified School District voted to immediately cut its school police budget by a third. The $70 million budget for the force of more than 470 officers will be reduced by about $25 million and the money dedicated to “support African American student achievement to the extent of the law,” according to the resolution.

Some 65 officers will be laid off and nearly 40 vacant positions won’t be filled, Police Chief Todd Chamberlain told the school board. He resigned Wednesday.

The school board also called for officers to give up their uniforms and patrol off campus. Board President Richard Vladovic opposed the move on safety grounds, urging a delay.

“We’re walking right into this without knowing where we’re going, and how we’re going to get there,” Vladovic said.

Mass protests nationwide have demanded shrinking or eliminating police departments, with activists saying police disproportionately arrest Black people and are seen as repressive figures rather than protectors in communities of color.

“We need to rethink what it is that makes people safer and makes communities stronger,” the City Council resolution said. “We cannot just look at the police in isolation. There is no doubt that communities of color suffer disproportionately from negative interactions with the police.”

The LAPD cut was part of a budget modification measure for the fiscal year beginning July 1 that comes amid the coronavirus pandemic. Months of social distancing measures, including closing many businesses, have left the city with a drastically reduced tax revenue and a potential shortfall of $45 million to $409 million, according to finance department estimates.