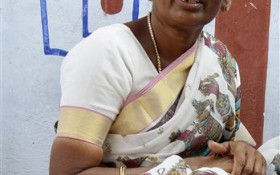 DUBAI, United Arab Emirates (AP) — Kasthuri Munirathinam, a 55-year-old mother of four from southern India, was plunged into debt after borrowing money to marry off her daughters. Like many before her, she was recruited through an agency and promised an opportunity to earn 1,000 Saudi riyals ($267) a month by working as a live-in maid in Saudi Arabia, the Arab region’s largest economy where domestic help is in high demand.

On Sept. 29, just a few weeks after arriving in the kingdom, she tried to escape from her employer’s house, using two of her saris to fashion a rope and climb from a third-floor window.

What happened next is unclear and disputed. What is clear, however, is the price Munirathinam is paying for trying to leave. She lost her most of her right arm and is now lying in a hospital bed in the Saudi capital of Riyadh.

The incident highlights the precarious situation migrant workers across the Gulf face under a sponsorship system that ties their livelihood and residency visas to their employer. Rights researchers say domestic workers, who number at least 2.4 million across the Gulf, are among the most vulnerable because the majority are women and live with their sponsor. Labor laws in Gulf Arab nations often exclude domestic workers from their protections.

Munirathinam’s sisters, speaking by telephone to The Associated Press in India, say her employer was overworking her and not feeding her enough. In calls to her family, Munirathinam told relatives that when she complained to Saudi authorities about her treatment, her employer punished her by locking her in a room.

According to her relatives, Munirathinam alleges that she lost her arm as a result of her employer’s actions. But a Saudi police spokesman said their investigation showed she fell from her makeshift rope and that the amputation of her arm resulted from injuries from her fall.

“She feared that they might try to harm her or kill her, so she tried escaping through the window,” her sister Vijayakumari Shankar said. “The recruitment agency told her that she would be able to make a lot of money and help her family out of poverty.”

Munirathinam’s older sister Mallika Jayavel says the sponsor is alleging she jumped from the window because she is mentally ill.

“This is completely untrue,” she said. “They are trying to put the blame on her instead of admitting their guilt.”

India’s Foreign Ministry has pressed for an independent inquiry and for the employer to be charged with attempted murder. The family is demanding she receive compensation since she will no longer be able to work. She also underwent back surgery as a result of the fall.

More than 2.8 million Indians work in Saudi Arabia mostly in lower-paying jobs, including some 60,000 maids. Last year, India and Saudi Arabia signed a labor cooperation agreement to secure the rights of domestic workers and their employers.

But Rothna Begum, a researcher on women’s rights in the Middle East for Human Rights Watch (HRW), said actual application of the law often lags behind the formal legal protections on paper.

“There isn’t a sort of task force to check if domestic workers are being afforded their rights or not,” she said. “The problem is the system is designed to where that leaves (the worker) trapped and tied to her employer.”

In some cases, domestic workers who try to leave an abusive situation can be found guilty of breaching immigration laws because residency visas are tied to the employer, who has to give consent for a worker to transfer employment. There are also no shelters to turn to. Migrant workers can either try to seek refuge at their home country’s embassy or head to a deportation center, but Begum says “that’s not really a viable place to be in to pursue a claim against your employer.”

The kingdom issued a bylaw in 2013 for domestic workers that allowed for protections such as one day off a week and a paid vacation every two years. However, other workers under Saudi labor law are limited to eight hours of work daily — compared to domestic workers who could be required to work up to 15 hours.

According to the International Labor Organization (ILO), Saudi Arabia is one of the largest employers of domestic workers in the world, with approximately 784,500. The ILO says that around a third are men, who take on jobs such as driving or gardening, while the majority are women working on average about 64 hours a week.

Kuwait has the second highest number of domestic workers in the Gulf with around 660,000, according to HRW. This year, Kuwait’s parliament approved a law giving domestic workers rights such as a weekly day off, 30 days of annual paid leave and a 12-hour working day with rest, HRW said in a report.

Rights group Amnesty International said last year that under Qatari law there are no limits on working hours for the country’s 84,000 female domestic workers and no requirement to allow them a day off. On Tuesday, Qatar announced new legislation aimed at reforming residency policies for its large population of migrant workers. The Qatar News Agency reported that the new law dealt with “the regulation of the entry and exit of expatriates and their residency.” It did not provide further details, and it remained unclear whether the new law would apply to domestic servants.

James Lynch, deputy director for the Middle East and North Africa at Amnesty International, said domestic workers face additional forms of discrimination that put them at greater risk because most are women and are physically living with their employers.

At times, it is the workers’ own embassies that tell them to walk away from pressing charges because the system might be skewed or the process too complex. Standards for proving sexual assault, for example, are much higher in Muslim countries where capital punishment is levied on rapists. Women who report being raped could face charges of taking part in “illicit relations” until the rape charge is proven.

“There simply isn’t the kind of follow through and careful investigation that you can expect,” Lynch said. “It can give the impression that the legal system is protecting sponsors from scrutiny.”