Labor and Education Department to be merged? - The Horn News 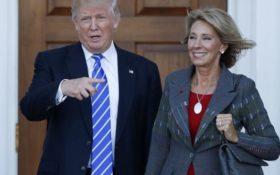 The Trump administration is planning to propose merging the education and labor departments as part of a broader overhaul to be announced on Thursday that would make good on President Donald Trump’s pledges to streamline the federal government.

The White House planned to announce the sweeping government reorganization plan at Trump’s Cabinet meeting, including plans to merge the two federal agencies, according to a person familiar with the plan. The person was not authorized to speak publicly and spoke on condition of anonymity.

Soon after he took office, Trump charged the Office of Management and Budget with coming up with a plan to reorganize the government and eliminate unnecessary agencies, pointing to redundancy and billions of dollars being wasted. Trump’s budget chief, Mick Mulvaney, has been putting together the plan for months.

Whether the proposal will prove effective is unclear. Some changes could require approval from Congress and congressional leaders have been hesitant to adopt a plan that would eliminate federal agencies they are charged with overseeing.

Eliminating the Education Department has long been a goal of Republicans. President Ronald Reagan, for example, sought to eliminate the department during the 1980s but backed down amid a lack of support in Congress.

Even before the plan was announced, it was met with skepticism among establishment Democrats and labor unions.

Sen. Patty Murray, D-Wash., said members of both parties in Congress had pushed back against Trump’s proposals “to drastically gut investments in education, health care and workers — and he should expect the same result for this latest attempt to make government work worse for the people it serves.”

Randi Weingarten, the president of the American Federation of Teachers, a union representing 1.7 million teachers and education professionals, said that under normal circumstances combining the education and labor departments might make sense as a way of bringing together education and workforce development programs.

“But there is nothing normal about this administration, so we’re extremely skeptical of the motivations here given how hostile [Education Secretary] Betsy DeVos and President Trump have been to public education, workers and unions,” Weingarten said.