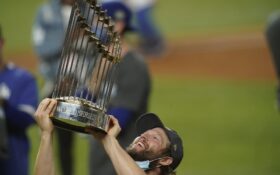 Clayton Kershaw stood in the Los Angeles bullpen in right-center field, watching Austin Barnes glove the final pitch, the one from Julio Urías that gave the Dodgers their first World Series title since 1988.

Kershaw had finally become a champion, just like Sandy Koufax, Fernando Valenzuela and Orel Hershiser before him. The mission took 13 years in the majors, 15 since the Dodgers made him the seventh pick in the 2006 amateur draft.

The left-hander raised both arms and pointed fingers toward the sky, a huge smile across his face. His blue Dodgers sweatshirt still on, the 32-year-old ace ran through the bullpen door and on to the infield to join his jumping teammates.

“I was trying to take it all in, as best I could,” Kershaw said. “You never really script what you’re going to do or how you’re going to feel. It was just a content feeling — just like, the job is done. We won. We did it. We won our race and it’s over. And we completed our mission. Just a feeling of contentment, joy. And then to get to see the guys and how happy everybody was.”

Kershaw cut through the critics at last, just like one of his curveballs through the strike zone.

One of the most accomplished pitchers in baseball history attained the achievement he had sought most when the Dodgers beat the Tampa Bay Rays 3-1 in Game 6 on Tuesday night.

Speaking as graciously as he pitched elegantly, Kershaw spread thank yous as wide as his famous 12-to-6 curveball. After posing on the the pitcher’s mound with his family, he thanked “my wife, my kiddos, my family, my friends and all those people that have seen the discipline.”

“They wanted it just as bad as I did and they wanted it for me. And that’s such a selfless thing to feel,” he said. “And so to get those text messages from former teammates or to get those text messages from friends or have friends at the game like I did tonight, just to see how happy they were for us, for me and for our family, it’s overwhelming to think that people care that much about you and how they want you to have success and reach your dreams.”

Kershaw went 2-0 with a 2.31 ERA over 11 2/3 innings in two World Series starts, striking out 14 and walking three. He earned his title not far from his hometown of Dallas, with family and friends filling a ticket allotment supplemented with “nosebleed seats.”

His honors are too numerous to list on his likely Hall of Fame plaque: a five-time major league ERA champion, including four in a row from 2012-14; a three-time strikeout champion; a two-time 20-game winner in an era when innings are diminished; a pitching triple crown in 2011.

But he entered this year just 9-11 in postseason play, with poor outings in a pair of World Series Game 5s that resulted in a 2017 no-decision and a 2018 defeat.

He performed in the postseason like never before, going 4-1 with a 2.93 ERA and 37 strikeouts with five walks in 30 2/3 innings. For the first time since 2015, he wasn’t inserted into a bullpen role when he wasn’t starting. That seemed to ease issues with back pain that has flared up repeatedly for five years.

Kershaw spoke passionately about Justin Turner, removed from the game after the seventh inning. Major League Baseball informed the Dodgers around the sixth inning that Turner’s COVID-19 test earlier in the day had come back positive, depriving Kershaw of a teammate who had been alongside him since 2014.

“I’m sure it’s really hard tonight and we all feel for him,” Kershaw said. “But I hope that he can take solace in the fact that we’re not here without him. He’s been our guy for a long time. He’s done so many incredible things for this organization. He’s been the rock in the postseason for us every single year. And just like tonight might not be the night that we expected as a team or that he expected individually, they’ll never be able to take away the World Series championship from any of us.”

Kershaw thought ahead to the moment when the jubilation would be as fulfilling as the final out was, would be the way he envisioned it for so long.