Kushner talks peace in the Middle East - The Horn News 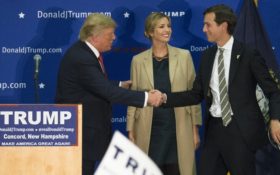 Jared Kushner is traveling to the Middle East this week to continue work toward a peace deal between Israel and the Palestinians.

A White House official said the senior aide and son-in-law to President Donald Trump will arrive on Wednesday for meetings in Jerusalem and Ramallah. Jason Greenblatt, Trump’s international envoy, will arrive on Monday.

Trump made a personal appeal for peace during a visit to Israel last month. He has cast Middle East peace as the “ultimate deal,” putting Kushner and Greenblatt in charge of the charting the course.

In remarks in the Middle East, Trump called on both sides to put aside the “pain and disagreements of the past.” But he did not offer any details on how to move forward and avoided issues that have stymied all previous attempts at a peace agreement, including the status of Jerusalem, Israeli settlement construction and the Palestinians’ demand for a sovereign nation.

The White House official – who was not authorized to speak publicly about the trip – said an agreement will take time, adding that there are likely to be many more visits by Kushner and Greenblatt to the region, as they seek common ground.

The Wall Street Journal first reported that Kushner was making the trip.