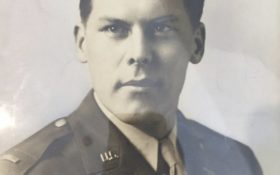 Not long after her father went missing during the Korean War, Carol Elkin spotted then-Gen. Dwight Eisenhower in downtown Chicago and did what any kid might do when coming face to face with the nation’s most famous soldier: She asked him to bring her dad home.

On Tuesday, the now 76-year-old Elkin will be at Arlington National Cemetery to bury the remains of Army Maj. Stephen Uurtamo, nearly seven decades after he was taken prisoner by the Chinese and died.

It is a chance to say goodbye to her father, watch as his remains are laid to rest with the dignity and honor he deserves, and watch her children and grandchildren see that their own history is linked to the history of their country.

“This tells my family they are part of something,” said the retiree, who lives on Chicago’s North Side with her husband. “I just think that these kids might think we went from World War II to Vietnam and they don’t even know there was a Korean War.”

The service comes as questions about the whereabouts of those who never returned from the 1950-53 war have pushed their way into the news, with the commitment by President Donald Trump and North Korean leader Kim Jong Un to recover the remains of as many of the nearly 7,700 U.S. troops that are still unaccounted for as possible.

For the Uurtamo family, the service is the final chapter of a story that began in late 1950 when the 32-year-old career soldier was declared missing in action after fierce fighting in one of the bloodiest battles of the war near the Ch’ongch’on River in North Korea.

He was declared dead after several returning U.S. prisoners of war reported that Uurtamo had been captured and died at a war transient camp where prisoners who survived came home with stories of watching their buddies starve to death.

“He died from malnutrition and pneumonia,” Elkin said.

The whereabouts of his body remained a mystery for decades. Then, in 2005, a joint U.S. and North Korean military recovery team recovered 32 sets of remains from a burial site. About eight years after that, Elkin went to a Chicago hotel for one of the events the Defense POW/MIA Accounting Agency holds around the country in which people like her are updated about their missing loved ones and given a chance to provide DNA samples for comparison with DNA pulled from recovered remains.

The match came last September and with it, Uurtamo’s name was taken off the list of Americans unaccounted for from the Korean War, which now stands at 7,697 names. He added to the list of 459 people whose remains have been identified since 1982. And, according to the POW/MIA agency, the spot where his name appears on the Courts of the Missing at the National Cemetery of the Pacific in Honolulu will be affixed with a rosette to indicate he’s now accounted for.

Elkin said she, her husband and more than 30 relatives will attend the burial. Inside the casket will be his remains, dress uniform and his medals, she said.

Elkin said it is a chance to be openly proud of the father, whom she rarely talked about because he died in a war few seemed to care about, and her parents were divorced and “you didn’t talk about things like that.”

Now, she said, she can talk about her father and her most lasting memory: a day when she was young and he visited her in the hospital and told her not to cry because “little soldiers don’t cry.”

She is excited by the prospect of her father being buried in “his rightful place” in the most famous military cemetery in the U.S.

“I am proud that our country would do this for someone who served so long ago — that he gets to go out in a blaze of glory,” she said.