Korea summit could be Trump's biggest EVER win - The Horn News 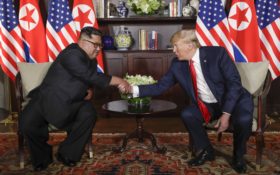 When President Donald Trump and North Korean leader Kim Jong Un first met in Singapore last year, there was pomp, there was circumstance, but there wasn’t enough to finish the deal.

The goal is safety for the entire world — but it’s a delicate negotiating process.

Before the two meet again in Vietnam on Feb. 27-28, there’s growing pressure that they forge a deal that puts them closer to ending the North Korean nuclear weapons threat.

The question, however, is whether what’s on offer will be enough for the other side.

Here’s a look at what each side could be looking for as Trump and Kim try to settle a problem that has bedeviled generations of policymakers.

The North’s Yongbyon (sometimes spelled Nyongbyon) nuclear complex, located about 100 kilometers (60 miles) north of Pyongyang, has facilities that produce both plutonium and uranium, two key ingredients in nuclear weapons. North Korea’s state media have called the complex of a reported 390 buildings “the heart of our nuclear program.”

Since fresh diplomatic efforts began last year, the North has suspended nuclear and missile tests and dismantled its nuclear testing site and parts of its long-range rocket launch facility. But destroying the Yonbgyon complex would be Kim’s biggest disarmament step yet and would signal his resolve to move forward in negotiations with Trump.

There is worry among some, however, that the complex’s destruction won’t completely dispel widespread skepticism about North Korea denuclearization commitments. It would still have an estimated arsenal of as many as 70 nuclear weapons and more than 1,000 ballistic missiles. North Korea is also believed to be running multiple undisclosed uranium-enrichment facilities.

“We could call (Yongbyon’s destruction) a half-deal or a small-deal,” said Nam Sung-wook, a professor at Korea University and a former president of the Institute for National Security Strategy, a think tank affiliated with South Korea’s main spy agency. “It’s really an incomplete denuclearization step” that matches past tactics meant to slow disarmament steps so it can win a series of concessions.

To get the North to commit to destroying the Yongbyon complex, some experts say Trump needs to make important concessions.

Those would likely need to include jointly declaring an end of the 1950-53 Korean War, opening a liaison office in Pyongyang, allowing North Korea to restart some economic projects with South Korea and possibly easing some sanctions on the North.

Kim may most want sanctions relief to revive his country’s dilapidated economy and bolster his family’s dynastic rule.

“For North Korea, abandoning the Yongbyon complex is a fairly big (negotiating) card … so the North will likely try to win some economic benefits,” said Chon Hyun-joon, president of the Institute of Northeast Asia Peace Cooperation Studies in South Korea.

At the Singapore summit, Kim and Trump agreed to establish new relations between their countries and build a lasting peace on the Korean Peninsula. But they didn’t elaborate on how to pursue those goals.

North Korea has since complained about the lack of action by the United States, saying it already took disarmament steps, and returned American detainees and the remains of American war dead. The U.S. for its part suspended some of its military drills with South Korea, a concession to North Korea, which calls the exercises dress rehearsal for invasion.

Kim and Moon agreed at the first of their three summits in 2018 to settle an end-of-war declaration. Moon said last month it could ease mutual hostility between Washington and Pyongyang, and accelerate North Korea’s denuclearization.

But some worry that a declaration ending the Korean War, which was stopped by an armistice and has yet to be replaced with a peace treaty, might provide North Korea with a stronger basis to call for the withdrawal of 28,500 U.S. troops in South Korea.

In his New Year’s address, Kim also said he was ready to resume operations at a jointly run factory park in the North Korean border town of Kaesong and restart South Korean tours to the North’s Diamond Mountain resort. Those are two of the now-dormant inter-Korean projects that supplied badly needed foreign currency for the impoverished North.

To make the Vietnam summit a blockbuster, Trump will likely need more than Yongbyon.

A bigger deal would see a detailed accounting of North Korea’s nuclear assets, and possibly shipping some North Korean nuclear bombs or long-range missiles out of the country for disabling.

That would be costly. North Korea would likely demand a drastic easing of sanctions and a resumption of exports of coal and other mineral resources.

A North Korean declaration of its nuclear program would provide invaluable information, if verified by U.S. intelligence, to Washington and others. It would offer looks at hidden nuclear fuel facilities and missile deployments, which is why Pyongyang has been reluctant to provide it.

According to South Korean and other assessments, Yongbyon alone is estimated to have 110 pounds of weaponized plutonium, enough for six to 10 bombs, and a highly enriched uranium inventory of 550 to 1,100 pounds, sufficient for 25 to 30 nuclear devices.

Undisclosed uranium enrichment facilities would up the stockpile.

Because of the difficulty involved, Trump may want to focus on the North’s long-range missiles, which could, when perfected, pose a direct threat to the U.S. mainland. But such a partial deal would rattle many in South Korea and Japan, which are well within striking distance of North Korea’s short- and medium-range missiles.

If lower level officials can’t lay the ground for a bigger deal ahead of the summit, the Kim-Trump meeting could be cancelled, said Lim Eul Chul, a professor at South Korea’s Kyungnam University who has advised the Moon government on North Korea-related policies.