Karine Jean-Pierre breaks down after this question - The Horn News 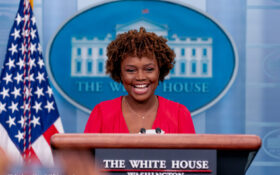 President Joe Biden has found himself in a public relations mess after mishandling classified documents for decades… and getting caught recently.

She broke down, laughing, after a tough question from Fox News.

Doocy asked, “Karine, when you found out that the FBI had located even more classified materials in Wilmington, which four-letter word did you use?”

“Oh, my goodness, Peter,” Jean-Pierre replied, laughing nervously as she was caught off-guard.

“People who don’t like you don’t laugh at your jokes unless they’re irresistibly funny,” one Twitter user said. “Disarming and clever.”
Sponsored: In 1944, an experiment was done in this Nazi medical center..

Doocy gets a laugh out of KJP: "When you found out that the FBI had located even more classified materials in Wilmington, which four letter word did you use?"pic.twitter.com/caQk9AmGyw

From there, the two of them shifted to more substantive questions about Biden’s possible future after this scandal.

Doocy asked, “President Biden is still intending to run for re-election in 2024, right?”

“I’ll just repeat what the President said after the midterm election, which is he intends to run,” Jean-Pierre replied, according to the White House transcript. “I’m going to be very careful from here, as you know, because we are covered by the Hatch Act. And I’m not going to speak further to his process.

As White House spokeswoman, Jean-Pierre has consistently hid behind the Hatch Act, critics have complained.

Doocy followed up, “Is there a precedent for people running for President after FBI agents search their sock drawer?”

“It sounds like you already know that, the answer to that question,” Jean-Pierre said, presumably referring to former President Donald Trump’s ongoing campaign. “Say that one more time.”

“I don’t know the answer to that question,” Doocy responded. “An FBI search of a President’s residence is a big, big deal… the House Oversight Committee Chairman says this document situation has all the makings of a potential coverup.  Is President Biden involved in a coverup?”

“You asked me, kind of, a question that everybody laughed at, which was an interesting question to ask,” Jean-Pierre responded. “But any other — any other underlying questions that you may have, I would refer you to my colleagues, the White House Counsel.”

Jean-Pierre went on to scold Doocy for joking about such a serious matter.

“Anything else, Peter — and this is — I’m going to be very serious,” Jean-Pierre said.

Jean-Pierre reiterated that Biden “has been fully cooperative with this legal matter.” She’s apparently trying to distance Biden from Trump… and from accusations of hypocrisy.